News from the pews 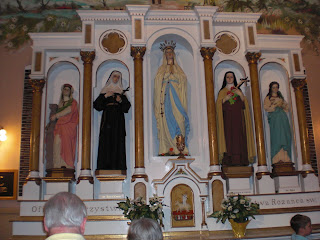 We get questions... unsolicited!

My friend Marta asks: "How was the Facebook Mass?"

The Facebook Mass was Sunday at St. Adalbert's Basilica, pictured above. I had to give up going to my Latin Mass for it, was the only negative thing. Between you and me and the Staten Island Ferry, I do secretly hope that the Pope is moving toward returning all Masses to Latin. Because I do not know why I should always have to be the one to give up something.

Every time anyone else drags me to a Mass it is always in the vernacular.

"And also with you." I do not like that response!

How did I get on to this?

The Facebook Mass. Other than that it was not in Latin it was a beautiful thing. It was cool how the priest pronounced Facebook "Fess-book." He had this musical Polish accent. They sang the Kyrie in Greek which impressed and delighted me.

I took this glowing picture of the church. 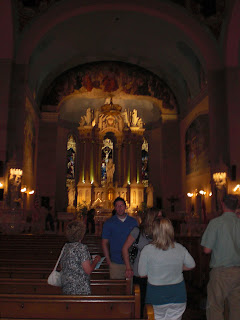 Here is a confessional at St. Adalbert's, with a penitent standing in front of it. 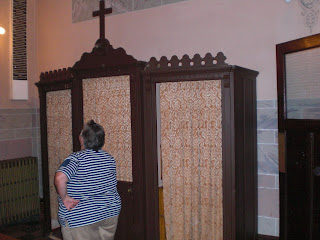 Across the street was the Ethiopian Orthodox Church ... 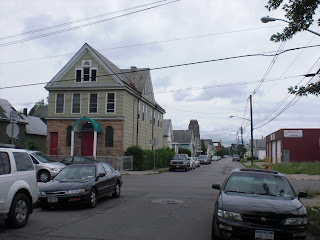 ... and weird mournful chant was emanating from it.

How is that for a quick year? Am I through yet with my book on Leonard Pennario? No!

The priest at St. Adalbert's said he was going to bless all the cars in the parking lot. I got to worrying because my car was not in the lot. It was off on a side street. So I went to him with my concerns. He looked at me as if to say, what kind of nut is this. Then he said, "I walked all around the block." So, OK, the Crown Vic was included.

Shame they don't use that beautiful high altar (original altar) and the altar rail.

It is a shame, but at least the high altar's still there - tried talking Fr. Ted into doing a Latin Mass but didn't get too far. He thinks you need special permission and couldn't be convinced otherwise.

Most of the communion rail sits in an office at Salvatore's, sold off in the 1970s (when the top of the Mary altar in the picture was chopped off, too). A parishioner tried - unsuccessfully - to buy it back about 10 years ago.