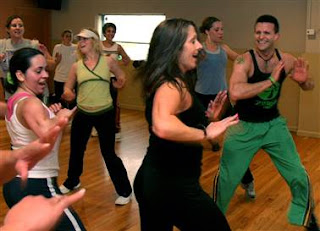 Today was a great day because I went back to Zumba class. I normally go dance Zumba every day but yesterday I could not. It was the Fourth so there were holiday schedules at the gym and I could not work Zumba in what with Mass and all.

Latin dancing bows to Latin Mass. Sooner or later it was going to come down to that. They are like two trains running on the same track. Once in a while, crash!

Yesterday was the first day in about two weeks with zut alors, no Zumba.

But now I am back!

There were only two people in the class which was at the downtown Buffalo Athletic Club. It was me and this other girl, Gail. She is a police lieutenant! No one else was there because almost everyone else was off. But we are hard core.

I do not know exactly what it is that makes me like Zumba so much. I am not great with rhythms and when it comes to guessing one foot or the other, all other things being equal, I always choose the wrong foot. Then I have to cover for myself. But I have noticed there are two secrets to covering your mistakes in Zumba. One, as I mentioned before, you smile. If you goof up, crack up. Who cares if you get it right, anyway. It is not as if I have screwed up my Leonard Pennario book or jeopardized my immortal soul or anything.

The other secret is, always make every move as if you mean it. Put confidence into it. You can get away with things in Zumba if you act like you know what you're doing. It is just like in real life!

Here is one thing I am thinking about.

It is funny how I discovered the Latin Mass and it turned Mass-going from a chore, which it sort of used to be, into something I absolutely love and look forward to and would die without.

Now I got into Latin dancing and it turned exercise, which used to be a chore, into something I look forward to and enjoy and hate to miss.

Isn't that funny? They both have Latin in there.

I am wondering what other Latin stuff is out there that I can use to fix my life.

I want to take other onerous things and turn them into things that I love!
Posted by Mary Kunz Goldman on July 05, 2010

Just keep looking and I feel certain you will find something, lol!