Big Blue in the limelight 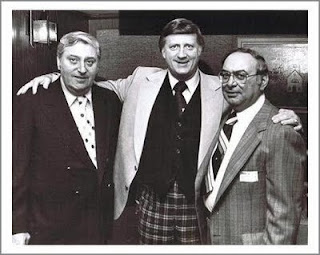 Big Blue is in the news again!


George Steinbrenner died and Howard was interviewed by a number of, ahem, media outlets about Big Blue and how it used to be Steinbrenner's restaurant, the Roundtable. Above is Steinbrenner, center, pictured at Big Blue with his partner Max Margulis, left, and Lou Madia, right. By "partner" I mean Margulis was his business partner, part owner of the Roundtable. You have to specify that these days!

When Steinbrenner purchased the New York Yankees, he made the announcement from Big Blue. Howard was interviewed about that on Channel 7 and the story was corroborated by sportscaster Rick Azar whose daughters went to Sacred Heart where I went.

Channel 7 referred to the old Roundtable as Big Blue which I love. Oh, and they interviewed our new friend Shane too! Shane, that is Shane-Brother-Shane the legendary disk jockey, was over at Big Blue and spoke eloquently about Steinbrenner and the Roundtable.

When they asked Shane to give his last name he said he had none.

Speaking of names I love Steinbrenner's name. It is so magnificently German. It is a perfect name for a business mogul as the name Leonard Pennario is for a great pianist.

Steinbrenner means "stone burner." You could take that to mean burning coal, the way I look at it anyway. Appropriately enough there was a coal-burning Great Lakes freighter called the SS Henry Steinbrenner. He was Steinbrenner's father. The Steinbrenners were in the shipping business among other things.

Here is a photo of the Henry Steinbrenner which was built in 1909. 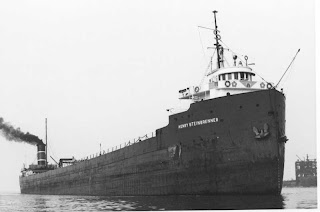 The SS Henry Steinbrenner sank in May, 1953, ending the lives of 17 men. It has been too long since this Web log explored Great Lakes history which has been a preoccupation of ours in the past.

We drink to the memory of all these illustrious Steinbrenners.

That was quit interesting. Enjoyed Howard's blog and video too.

BTW, the LP/Brahms was delightful.

BTW, just noticed... What is the deal with the slideshow on the right side of the main page?