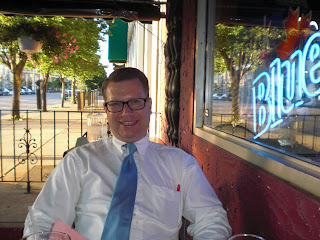 Yesterday Howard and I dined on the patio of our local taverna, King's Court. The owner, Sam, is from Greece and his souvlakis have the greatest salad greens and you can get chicken, beef or lamb. Nobody knows about the souvlaki at King's Court but I am telling you, it is the greatest.

We walked over to King's Court from Big Blue. It was a perfect evening. After work I managed to get in two hours of Zumba dancing! And now it was this beautiful evening and we were dining on the patio of King's Court. While we ate we talked big about when Big Blue becomes the Junior League Decorators' Show House. As I said we have to enjoy the prospect now because after Saturday that prospect could well be no more.

Once the Junior League sees Big Blue they might run! Howard sent them the link to the story about it on Buffalo Rising and they seemed to like it a lot. But on Saturday when they see it, hey, you never know.

Another couple was on the patio of King's Court too and soon we were joined by a pair of Indian guys. It is funny how that works, the more people you have eating on a patio, the more arrive. Oh, they think. This place must be good, look at the people eating here.

The guys from India were so cute. They ordered big draft beers and sat there talking English to each other in their Indian accents. It made me think of when I was 16 and was an exchange student in Germany. Toward the end of my stay, which was about a month, I was making plans to meet up somewhere with two other American students over there. And the funny thing was, we were in a hurry when we were setting up these plans but we talked German to each other, trying to figure things out. We started laughing later when we realized that. You get to the point where you are used to it and do not think about it.

Anyway, a beautiful day, and I drove home listening to Leonard Pennario playing Schumann. I have been getting good at copying Leonard's old records onto CD and now I can start taking them wherever I go.

One thing, yesterday I forgot all about a dentist appointment I had. Zut alors! Well, maybe I can reschedule it today.

Today is a rainy day.

Oh my, a doctor appointment is looming this morning and I am hoping I fare better that Mary surely would,if it were her who was going out to the doctor, LOL. It is raining and I am listening to the beautiful Rorate caeli, on repeat, that Mary posted a while back. That will prepare me for going out into the world this morning. Not being Catholic, I am allowed to do that.

Mary, if you can live with the somewhat reduced quality of mp3 because of the compression, you could burn them to a CD as mp3 files (data files) and a disc would hold maybe 5 or 6 hours. The songs can be tagged too. That will show in the display. However, it does take a rather new CD player to read them and, do not expect your clock radio/CD to play them. I am getting one put into my car shortly!