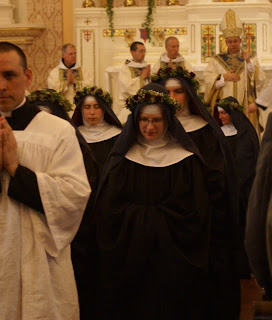 There are new nuns in Kansas City. I have seen pictures.

I do not think we have the like here in Buffalo.

Above is a picture I cribbed off a Kansas City Web log. Apparently when nuns take their vows they are crowned with flowers. These are Benedictine nuns. They have incredible names like Sister Scholastica and Sister Gemma of Jesus.

Here are pictures of the nun ceremony. I have heard there is a part to it where they lie on the floor and that appears to be the truth. 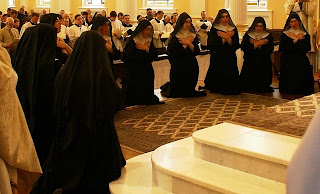 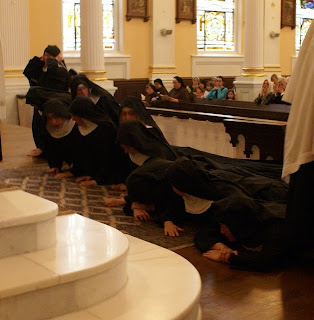 Admit it, who is not interested in this? I know I am! Another person fascinated by nuns was Franz Schubert who wrote a song called "The Young Nun." It ends with a haunting "Alleluia." Someone has made a cool video of it on YouTube.

Here is Dame Janet Baker singing the song. This video has a translation so you can understand the Gothic story the song tells.

After their ceremony the nuns in Kansas City gather for a picture. 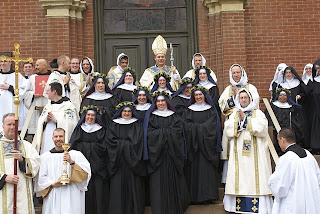 And because a nun is the bride of Christ, naturally there is a wedding cake! 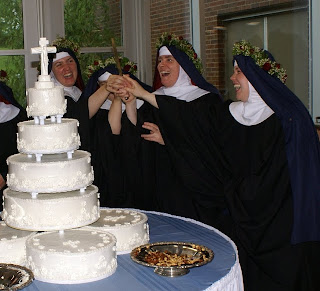 Here is something to think about on a Monday morning. If you were a nun what kind of nun would you be? I would be a contemplative. I would garden and bake bread and pray the Liturgy of the Hours. And when no one was looking I bet I could get in a few hours of working on my book on Leonard Pennario.

Initially it might disturb the peace to hear the Pennario/Leibowitz Liszt emanating from my cell in the middle of the night but I am sure the convent could get used to that.

Although the idea of taking a ruler and rapping the knuckles of people who annoy me is attractive, I will say that.

Especially on a Monday morning.