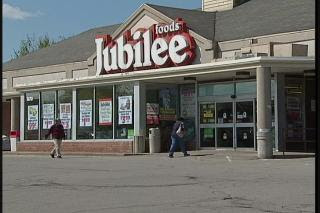 Our friend Christopher Byrd made the announcement on Facebook that Jubilee Foods is being snapped up by Tops! That is the supermarket I go to when I am going to my mom's. It is a shock to see it is being bought by Tops. The following Facebook conversation ensued.

Oh no, that's my Jubilee! I always go there on the way to my mom's. It is historic... an old A&P. I hope they don't mess with their vintage checkouts!
Yesterday at 11:52am ·

Also what about those announcements that squawk over the loudspeaker, about the Harlem Helpers? I am rapidly deciding this is not good news.
Yesterday at 11:54am ·

Tops also has control of Quality at Main and Union...
Yesterday at 12:19pm ·

This is terrible news! One less option for those of us who prefer small, dirty grocery stores. Where will people go for 1/2 price birthday cakes now? Mary, where will you buy your meat?
Yesterday at 5:32pm ·

Ryan, good question! There will never be a dirtier meat counter than at Jubilee but I have to say, just the other day, I bought buy-one-get-one chuck steaks. Did you notice they put up a roll of paper towels? You need them because they can't pack the meat properly.
8 hours ago ·

Mary, the last time I was at Jubilee, I picked up some ground chuck for hamburgers on the grill. Several of the packages contained a substantial amount of bloody liquid. I had to be very careful which one I picked. This type of situation just doesn't seem to happen at other stores, not even at The Market. Is the Jubilee in Blasdell still open? Maybe we can take field trips out there to get our Jubilee fix.

Ryan, we will indeed!

That is disgusting about the bloody meats. There were times when I was there and did not buy meat because I knew it would come off on my hands. The paper towels arrived only recently.

But it is funny we got past that situation. How low will we go to get deals on chuck steak? Answer: Pretty darn low!

Back to Jubilee. A few things I will miss: The bin in the dairy aisle where they put marked-down yogurt and cheese. The announcements about the Harlem Helpers that make you think you are in a small town circa 1930. I kept wanting to joke about those announcements in the paper but my brother George and I worried that if we got the word out, it would embarrass Jubilee and they would end the announcements. We did not want that to happen!
Other things I will miss: That stressed-out gray-haired little guy I always see running around whom I take to be the manager. And the day-old bread shelf where you get reduced-price muffins and bagels. I do not know any supermarket that still does that beside Jubilee.

Now it will be no more.

Rage, rage against the closing of the supermarket.
Posted by Mary Kunz Goldman on May 14, 2010