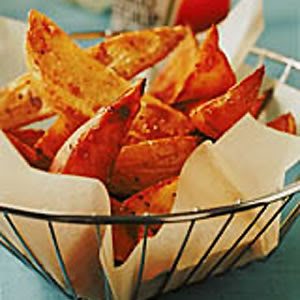 This morning I made a big mistake. I had a pan of sweet potato oven-fries I had not yet baked. And I stuck them in the oven so they could bake while I did all my morning stuff: took a shower, read the paper, said my prayers.

I thought: Those fries will not get better the longer they sit out. It makes sense that I bake them.

After that I could not stop eating them!!

I think I left five of them sitting there on the pan and that was just so Howard would not think I was piggy eating every last one.

While I devoured these fries I read a story in today's Wall Street Journal about sweet potatoes. There is a big picture of a sweet potato on its front page, how is that for a coincidence? Apparently scientists are working to develop a sweet potato that will be uniformly palatable to everyone and easily cuttable into McDonald's fries and things like that. It will be a differently shaped sweet potato because the sweet potato's pointy tips add up to a lot of waste because machines cannot cut them easily.

Messing with the sweet potato makes me uneasy. Here is a food that is perfect the way it is. It is time for the artist to lift his brush, as Howard would put it.

Try my oven fries and see if you agree. Here is what you do. Take a big sweet potato, one or two pounds. Here is where you can take advantage of the fact that big sweet potatoes are cheaper. Take this big, cheap sweet potato and cut it into fry shapes, about a half inch wide. They can be strips or wedges, whatever satisfies your artistic needs.

Next take a big bowl and pour a couple of tablespoons of olive oil into it. Toss in 2 teaspoons of paprika. I used this wonderful Hungarian paprika because I do not like to compromise when it comes to this recipe. I also threw in a teaspoon of cumin and a few grinds of black pepper and a teaspoon of dried thyme. In the winter it might be fun to use cinnamon. Mix this all up and then throw in the sweet potato strips and toss them around. Then spread them on a baking sheet and bake at 400 degrees for about 45 minutes or until they are browned.

Last night I was cooking a turkey and so they baked at 350 degrees but now I wish I could have been able to bake them at 400 degrees because that makes them crisper.

When you eat them they need no ketchup, no nothing. And you would swear there was honey on them but there is not!

They are so good! They are like Leonard Pennario playing Chopin. No muss, no fuss.

Once again you have managed to starve me to death, lol. As my brown rice simmers, getting ready to meet the Pinto beans, I dream of these french fries! I have copied the recipe and will get some on the next trip to the store. They look and sound almost as good as that Chopin! lol

Wonderful! What does McDonald's mean by making the sweet potato "uniformly palatable?" It sounds like they are going to mess with the size, AND the taste. Frowntown.

Also, do you peel the potato first?

Frowntown!! I love that word!

No you do not peel the potatoes. Just give them a scrub. I actually love eating sweet potato jackets. When I do baked sweet potatoes I always eat the whole thing. With butter and sour cream!

Larry, are you really eating pinto beans and brown rice? It sounds like what I eat!

Yes, I am, Mary. I eat them every day. Normally though, I cook big Red beans but a man needs some variety now and then. Pintos are good but Red beans are my fav. Tons of garlic, onions, black & red pepper and salt. I keep the pots of beans & rice (separate) in the fridge and just microwave a bowl full each morning. Bachelor food! lol