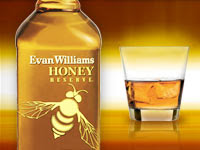 I just spent way too much time taking care of my wine and liquor rebates. It is getting to be a substantial part of my income!

There is a new bourbon I tried. Well, it is new to me anyway. It is Evan Williams Honey Reserve! And here is the best part: It was something like $14, and there was a $10 rebate.

Howard tried it and we pronounced it good. It is a little like Southern Comfort. It also has a cool logo which is that honey bee. That makes me think of Muddy Waters' "Honey Bee." A song I love! However it must be that version. I like that raw Delta early-Muddy sound. I also love how he does the buzzing of the honey bee.

Poor Muddy Waters. Only 133 views for that recording of "Honey Bee." Leonard Pennario puts him in the shade, I have to say that. Leonard Pennario and Muddy Waters released their first records at exactly the same time, how about that? Muddy's first record was "Louisiana Blues" and it came out the same time as Pennario's debut record which was Prokofiev's "Visions Fugitives" and Sixth Sonata. Now there is a useless music fact. No one in the world would care about that but me.

Back to the Evan Williams Honey Reserve. It is yummy as I already said. But it comes with the grossest recipe. The drink calls for, in addition to a list of other things, 1/2 ounce of Energy Drink.

Energy Drink? What energy drink? Doesn't it matter which one?

I do not trust this recipe.

Nevertheless I think I will scoot back to Premier and buy another bottle of this, now that I am all high on myself for having gotten my rebate in.

It is funny, I played this game before, of satisfaction points.

Ha, ha! But it is true, you have to be superhuman to send away for a rebate. And not to have it come back because you did not put your age or something. Normally I give up before I start. I do not even buy a bottle of anything requiring a rebate.

But with the Honey Reserve I made an exception. Then I got home and said, well, you HAVE to do this one.

'Energy drink'? I bet I know which one although I do not know the name(s) of it(them). In yesterday's paper, there was an article about how kids are buying it locally because the labels look like kid's drinks. Energy drinks with alcohol. And they are serious drinks, too. Up to 12% alcohol. Just what our kids need marketed to them.
But anyway, seems like a good one to fill the bill? :)