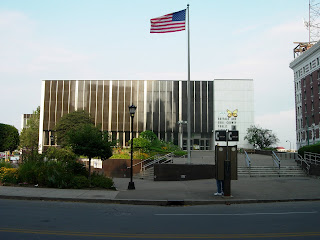 Buffalo is going to hell in a handbasket and in the past few days we have had three buildings closed temporarily because of threats. First the Ellicott Square Building closed and then City Hall was closed.

And then, zut alors, the library was evacuated! That is our Buffalo and Erie County Central Library pictured above. A flattering picture I might add.

I did not see the library evacuation reported by any news outlet but the reason I know about it, I was there. I had this book on Jascha Heifetz that I had to take back. That is this book by Ayke Agus, a violin student from Indonesia who was close friends with Heifetz in the last years of his life. She wrote this memoir I find moving in some ways because I draw parallels with my situation with Leonard Pennario. Here is something funny, Ayke Agus went to Daemen College. She was from here.

One goofy thing, though, Ayke Agus writes that she and Heifetz were not naming any names. Ha, ha!

Pennario named names, I will tell you that right now!

That is one reason why I am taking so long to write this book.

Anyway, I had this book out once before and then I went and got it out again so now here I was with no way to return it because our stupid library was closed because of a threat. I was standing there thinking, something is happening to our sense of public order, you know? I never remember things like this happening.

So I will not say it is like Northern Ireland. I will just say it was weird.

All the workers were standing around outside talking on their cell phones and drinking coffee and behaving the way we used to in school when there was a fire drill. No hurry to get back in.

My escalating fines!
Posted by Mary Kunz Goldman on April 15, 2010

That Liszt is amazing. What a team Pennario and Leibowitz made! I wish there was more. Hope Rene makes it into the book.

About bomb scares, I think society is fragmenting to a point where an existing class "cold war" is heating up, and these incidents are just one sign of it.

Just drop your book off in one of the drop boxes. No more 'Fine Mess' :)