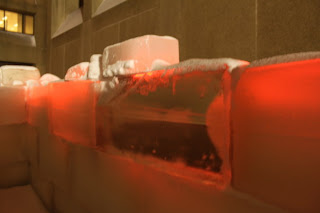 We have this gigantic ice maze in downtown Buffalo, at least we did yesterday, for our new Powder Keg Festival. That is a great name, by the way. Powder = snow and keg = beer.

That is a picture up above of a tiny sliver of our massive ice maze. It is by HSBC Arena where there is the Tim Horton's where I walk to sometimes when I need high-octane coffee.

When I walk there today will the ice maze still be there? Could I get lost in it?

And what next? Will it eventually melt into a torrent of ice water? Will it crumble little by little?

But now it turns out that our ice maze has plenty of competition.

Here is a made-in-Japan ice maze. Here is an ice maze somewhere else, I don't know where, but it is lighted up beautifully. 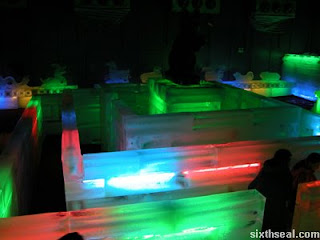 In Lapland they have elaborate ice mazes and they also have this ice bar. 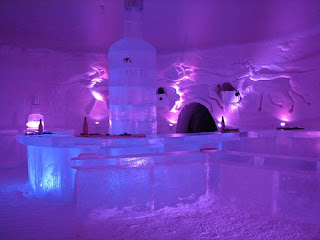 Isn't that pretty? I love that ice bar. I keep sitting here staring at it.

Would that I were going there today instead of to work!
Posted by Mary Kunz Goldman on March 01, 2010

I have had quite enough ice of any kind, lol. Would that I were going to Hawaii! But yes, they are pretty.

Ha, ha! Would that we were both going! How about that Hawaii tsunami?