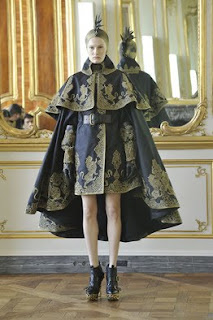 High fashion has to be one of the biggest scams going these days. I just saw that picture above in the Wall Street Journal yesterday. It is by this designer Alexander McQueen.

That model! Howard said, "I love how dumb and miserable she looks."

He imitated what the model must sound like. "Please, give me a hamburger."

I really want to go to the Philharmonic looking like a playing card, you know? Looking like someone out of "Alice in Wonderland."

Leonard Pennario would have been really impressed with me if I had been dressed like that when I met him.

Now this kills me, so to speak: According to the Wall Street Journal writer -- her name is Christina Binkley -- this designer, Alexander McQueen, committed suicide last month. And she goes on and talks about how his "art" reflected his final days.

At the time of his suicide last month, Lee Alexander McQueen was working on clothing covered with ornate images of death and afterlife.

His collection, one of the most anticipated of the fall 2010 season, was shown Tuesday to small groups of viewers in Paris. One gathering of nine people, including Vogue creative director Grace Coddington, watched in reverential silence but for one woman who wept copiously. Even more striking than the small, somber presentations were the otherworldly motifs, such as angels and doves, woven throughout the collection.

I love that. As if he were Mozart and the Requiem, or Schubert and "Schwanengesang."

Not to blame the dead, and may God rest Mr. McQueen's soul.

That is enough to kill anybody!

But the Schubert was wonderful!