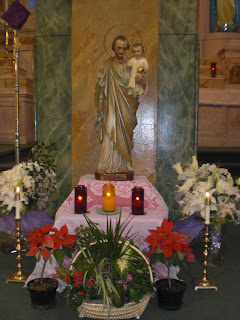 Friday was the Feast of St. Joseph and today at church I snapped this picture of St. Joseph in the front of the church. He is holding the Baby Jesus. May I add that this post is by request! Father Secondo at St. Anthony of Padua Church requested a Web log post on St. Joseph ergo, I oblige.

It is as if we live in Italy! My friend Jane is writing a weight-loss series for The Buffalo News and one of the people losing weight in her series is Father Angelo. I cannot remember what Father Angelo's last name is, but the point is, I have Father Secondo and she has Father Angelo. I always hear her on the phone with him.

We may as well live in Rome!

Back to St. Joseph's Day and the St. Joseph statue. Here you can see the statue in the context of the church. 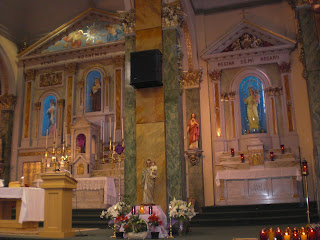 There he is, in the center, looking kind of small. Way to the left -- it is off the picture, actually -- is the baptismal font which is where Leonard Pennario was baptized. I will have to take a picture for my book. But zut alors! My book is already over 500 pages long!

Today for the first time I wore my, ahem, chapel veil. Remember when I bought it at that estate sale? Today I wore it for the first time. I did not plan on wearing it but I realized when I was in the car that I had forgotten my hat. It was in the house in my Aldi bag with my estate sale purchases from yesterday. So I had no choice but to wear the veil.

I felt self-conscious but I got through it. I have to say, this bit o' black lace on my head was more comfortable than the hat. The hat can get hot.

Perhaps I should say mantilla and not chapel veil. Mantilla sounds sultry and Spanish which are two things that I am not, but it is fun to pretend that I am!

In case I thought I looked unusual, though, there was a guy at Mass with sneakers and a Mohawk haircut. That is because the NCAA basketball tournament is in town. It was sweet, actually. After Mass I saw this guy with his Mohawk going around looking at the statues. Including the statue of St. Joseph.

St. Joseph was the husband of Mary and he brought up Jesus as his own son, even though Jesus was the son of God and not technically Joseph's son. Every time I think about all that I think of how lucky Mary was to have found Joseph. He was one in a million, that was for sure.

It lends a human note to the gospel, how when Joseph found out Mary was with child, he was going to break the engagement. Then the angel told him not to and so he did not. What a wonderful man.

Hence the age-old Judeo/Christian prayer: "Dear St. Ann, get me a man." St. Ann was the mother of Mary and wanted a good husband for her, and sure enough, Mary found one.

I used that prayer and it worked!

Here is a beautiful German hymn to St. Joseph. The Italians do not own him even though sometimes it seems as if they do.

And here is a great St. Joseph joke Father Secondo sent me. Ahem. I will cut and paste:


WHEN Jesus returned to heaven, He wanted to meet his “paesani”. The first one He looked for was St. Joseph. Since He did not know what he looked like because St. Joseph had died when He was still a child, Jesus asked if there was any carpenter in the crowd. They told Him there was in fact an old carpenter down the road and he just looked like St. Joseph. So Jesus went to see him. As soon as He saw the old carpenter, Jesus said “Hi, daddy!” The old man opened his arms to embrace Jesus and said “Oh, Pinocchio!”
Happy St. Joseph's Day!
Posted by Mary Kunz Goldman on March 21, 2010

Must be a typo in the first graf IDing the statue as St. Anthony.

Thanks, Anonymous, for the free copy editing!! I fixed it.

No mention of the crosses I covered before Mass?! Psshh...

Brendan, I admired those covered crosses! Do you read Father Z's blog? He asked us to vote on whether the crosses were covered up and I voted a big Yes!

Bill wasn't the only one who noticed the "new" mantilla.

I made sure to cover the crosses, because the veils really emphasized that we are now in Passiontide - they're the tangible part of it, along with no Psalm 42 and Gloria in the introit.

See you for Palm Sunday. The crosses will look different again.

Gentlemen, thank you for the nice words on my new mantilla! New to me, anyway! I was thinking, it must feel nice to this bit o' black lace to be out at Mass again for the first time in God knows how many years...

And Brendan, I noticed the absence of Psalm 42! I will be looking forward to see what you do with the crosses next.