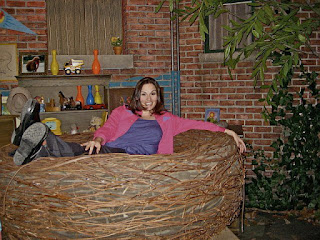 The miracles of the Internet! Favors are granted and questions answered.

For instance there is the situation with yesterday's big bird.

My friend Marta, yesterday, thinks that the owl I saw might have been a giant stork! "Maybe it's visiting from Morocco," she wrote. Marta just came back from Morocco where giant storks and their giant nests were everywhere. An awe-inspiring concept!

Imagine walking down the street and seeing a giant stork in a giant nest. It sure gives a new meaning to getting a visit from the stork, that is all I can say.

Holy cannoli, here is a picture of a giant stork nest in Marrakesh! 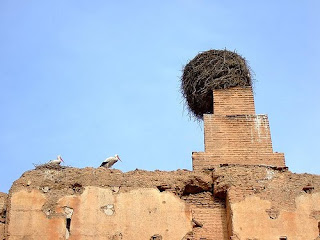 Then again the nest I saw was in the ballpark. Get it, ballpark? I am pretty sharp for not even 9 a.m. and having been up late last night.

I grew to love music because of "Sesame Street." They played Mozart's "Eine Kleine Nachtmusik" and I kept hoping to hear it again, which, luckily they played it over and over, and I got hooked. One minute I am watching Big Bird, the next, I am slaving away at this book about Leonard Pennario. That is something to think about.

We have one more theory about the bird in Delaware Park and that comes from Howard's friend Dave Pettigrew who thinks the owl was a red-tailed hawk. He said owls are active at night. I do not remember seeing a red tail on this bird but maybe I was too startled to notice.

I love how my friend Larry writes, why don't you take a picture?

Because the thing would eat my camera, that's why!

Eat your camera? In that case, just shoot it down then! Or you could chop down the tree... lots of other options.

When Cosima Wagner was a little girl, she was sometimes called "the stork".

I still think the Bloviator needs to chop down the tree and get the rascal!

Prof. G, I'll have to put together a Music Critic post about Cosima being "the stork." That is so cute. I can imagine her looking like a stork. What a trip it must have been, being Liszt's daughter, you know?