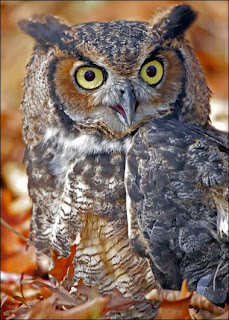 It is the crow update! Remember the crows?

One thing I did not mention was that besides mobbing the trees in back of the house, they bombed the car. I was still in it at the time because I was listening to Leonard Pennario playing Brahms and wanted to wait until it ended. I was listening to this Brahms and watching the crows wheel all over the sky and wondering what all this was adding up to. Then ... pow!

Crow poop all over the car!

What primitive behavior! Hence the term Crow Magnon Man. Plus there was this clattering. The crows had thrown sticks down too. There were sticks and twigs lying on the trunk.

All we could think later was that the crows had bombed the car as a warning to the owl. We were reading up on crow behavior and when the "mob" somewhere, that is gather by the hundred and caw and caw like crazy, it is a show of strength in the face of a predator. Usually there is an owl nearby. Or an eagle. Or a hawk.

Back to the crow do-do. We had to take the car through the car wash and even after that, some of the crow do stuck. That is how tenacious it is! A show of strength of the first order, that was what we had witnessed. Surely the bird of prey, whatever it was, had fled, its feathers ruffled.

That was what we thought until we took a walk around the Delaware Park Ring Road. A couple of Buffalonians had paused in the path and they were staring up at something. We joined them. And we soon saw what they were looking at.

There was a great big bird sitting in a tree!

As we were watching the bird lifted its wings and flew off. It looked like an owl to me, rounded and with a big chest. Howard thought owl too, or maybe eagle. The bird flew to a tree in the middle of the meadow. And in the tree was a huge nest. You could see it clearly from even where we stood, which was quite a distance away.

The bird flew into this nest and there it still sits, I imagine, feared and unchallenged.

Howard looked around and pointed out there were no other birds in the vicinity of the park meadow. This bird knew its turf and it owned it. No one will come near it!

Has anyone seen this bird?

Get a pic of it if you can. ID would then be easy.

I think that cage was the Condor cage. The herons have not returned as yet. One Turkey Vulture has been sighted. Wish I could run over and see this bird. It is way early for nesting.

Can you tell me where in the park the bird was sighted? I have a birding friend inquiring.

Bonnie, thanks for your help! About it being early for nesting, I do not think this beast follows normal rules. The nest was in this tree strategically situated in the middle of a kind of field, near the Scajaquada side of the circle.

Maybe it was a stork. Maybe it's visiting from Morocco. In Morocco, there are HUGE stork nests everywhere. Never seen anything like it before.....

Owls tend to be nocturnal, it was most likely a red-tailed hawk.

I have been collecting owls for years (they are like my personal symbol).. and I have yet to ever see one in the wild. They are nice neighbors to have!