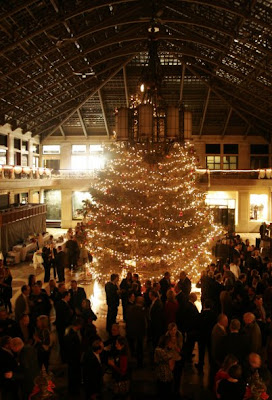 We celebrated Beethoven's birthday by going from Carl Paladino's Christmas party last night at the Ellicott Square Building to Shanghai Red's where Howard played the piano.

Above is a picture we took of Carl Paladino's party. Note to out-of-town Leonard Pennario fans: F. Scott Fitzgerald lived in Buffalo until he was 5 and that is why we like to live as if we are out of "The Great Gatsby."

Here is a picture of Howard serenading the lounge afterward at Shanghai Red's. 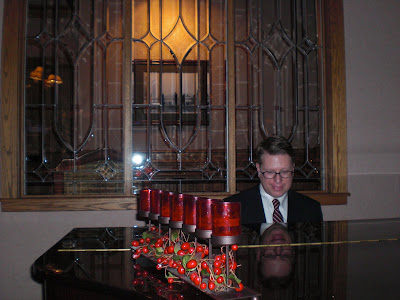 We almost did not go to Shanghai Red's. Howard wanted to go home and so did my friend Jane's friend Andy, who was with us. But Jane and I talked Howard into going and then Howard refused to drop Andy off at his car. He said, "You can be the one who makes sure we stay for only 20 minutes."

Except for at Shanghai Red's the hostess was trying to throw us out!

When we were walking in, she snapped to us, "We're closed." And my friend Jane, her friend Andy and I were going to say, "OK," and walk meekly away, even though we had been looking forward to Shanghai Red's with its fireplaces and view of the water.

But Howard was wise and he just walked into the lounge. And we followed!

And the bartender poured us all drinks.

And right as soon as he was done the hostess stalked in and she told him he should not have served us, that they were closed.

But the genie was out of the bottle and so was the wine. And we stayed!

Immediately we took over the piano. Here you can see Jane and Andy and the twinkling lights of the harbor. 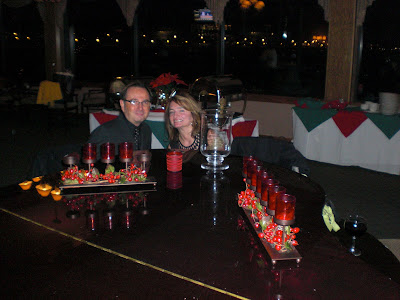 Howard was playing "The Christmas Song" and "P.S., I Love You" and other songs and the people who were already in the lounge were turning around and smiling and getting into it and ordering more drinks. The hostess who had tried to tell us no room at the inn got mad. She came in and yelled at the bartender and then she turned off our fireplace... 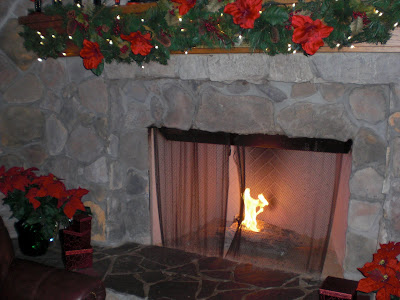 There are only two Shanghai Red's as you can see on their Web site. One is in Marina Del Ray, Calif., and the other is here in Buffalo.

We have worn out our welcome at the Shanghai Red's in Buffalo.

Next time we will have to try the other one!
Posted by Mary Kunz Goldman on December 17, 2009

Let me know if you do come out here :)

Turned off your fireplace!? The audacity. Somebody needed to 'light her fire', that's all.

Well, it does sound like that under the leadership of Howard, Shanghai Red's was indeed Shanghaied by y'all.