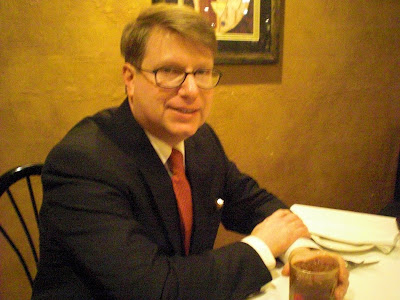 Howard and I went to Fanny's last night to celebrate our 5th anniversary. Fanny's is where we met, sitting on adjacent bar stools.

I still remember our first conversation. Howard said, "Do you know this song the band is playing?"

That is how I know I liked Howard! Because I know my Duke Ellington and I knew darn well the song was "Sophisticated Lady." And here I was stammering and acting as if I were not sure.

That is Howard pictured above with his Manhattan.

Here I am with my braces. 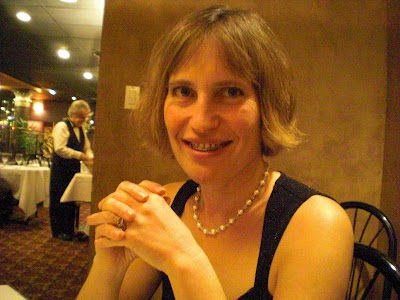 Get a good look because they will be gone soon!

I called earlier yesterday for reservations and you would think Fanny's would make some kind of little fuss out of us because we met at Fanny's, as I explained on the phone, and for years we were regulars there. But no. No one could have cared less that we had met there. The red carpet was not rolled out for us. That was OK. We were laughing about it. We were saying it was like New York City where nobody cares.

That is our waiter you see on the left in the picture of me.

We ordered this seafood diablo which we always used to get. It is kind of like our dish. Only now it was 10 times spicier than when we used to go there. All we could think was someone got into a fight with someone in the kitchen and they started throwing cayenne pepper all over into everything. Sicilians are always fighting. I used to tease Leonard Pennario about that.

The spicy food got me laughing too. It is not fun to laugh when you are eating something this peppery!

But it was a wonderful anniversary and all the goofiness about it just made it funnier and more memorable.

Looks like we made it!
Posted by Mary Kunz Goldman on December 13, 2009

You guys look wonderful! Glad you both had a superb time.

BTW, I loved the Pennario recording from Kraft Music Hall- 1948. It was awesome to get to hear his voice. He sounded so wonderful and his sense of humor was great! I really liked two of his remarks. 1- About how the requests often had 'boogie woogie' following Beethoven, and 2- when Eddy asked him how he kept his right hand from doing what his left hand was doing, he said, 'That's what I'm in the middle for.' lol Brilliant man! :)

His Debussy: The Girl With The Flaxen Hair (beautiful), and Boogie Woogie are now two little mp3s on my desktop, lol! Gosh, I was only 1 year old at the time!

Oops! That is a typo above. The correct date should be:

Happy Anniversary to you both... Our reception was at Fanny's and we go back to celebrate there too. The waiter in the picture served us last time... My wife loved her dish, and asked a question about it, and he gave her the step by step on how to make it... What a bonus!

I love this! You look so pretty, and Howard looks great too. He was taping you? Like in Man from U.N.C.L.E. or Get Smart or something? With what? Did he casually reach into his breast pocket and turn on a recording device? Did he push the centerpiece closer to your mouth? What?

Dear Larry and Buffalo Bill and Libby, thanks for the good wishes! Bill, aren't those booths at Fanny's great? We usually sit in the booths but the other night we opted for that semi-private table which is fun too. Interesting place... you could write a book about it.