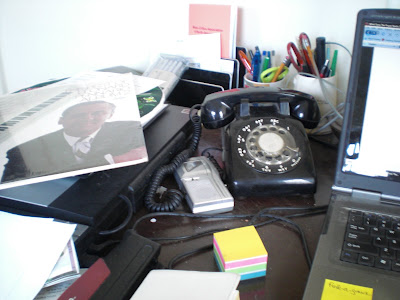 Howard and I have now converted completely over to dial telephones. Above is a picture of my desk now that I have replaced my annoying Big Lots phone with that sleek black classic. It is a Western Electric!

Click on the picture and you can take a closer look!

The people who owned that black telephone before clearly respected its classic nature. Because those stickers they used to hand out, with the emergency fire and police numbers, they stuck it on the bottom of the 'phone, not on the cradle where you would usually put it.

Imagine, your house catches fire, you are scrambling in the smoke going, "Where did I put that sticker?"

And someone says, "Oh, you have to turn the telephone over."

This was a well-loved and well-respected telephone! I paid $5 for it. The 'phone was originally marked $10 but I got it half price from this wonderful Polish family in Cheektowaga.

I also bought a record player from them, and a Dinah Washington record. There was also a statue of the Blessed Mother and I would have bought that too except I heard someone else inquiring about it. And the woman from the family smiled and said, "Mary is going with us."

Isn't that sweet to hear?

We proceeded to another sale where I bought another 'phone. This one cost me only $1.50. I put it in the kitchen to replace the 1964 'phone I bought a few months ago. 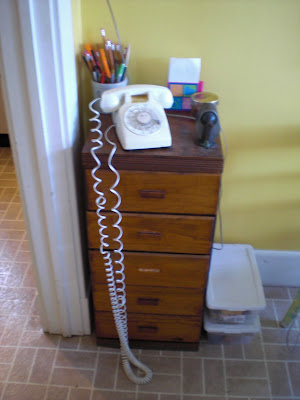 This long-cord telephone is from the 1970s but I like the long cord because I can work in the kitchen while I gab. I am going to use it today to call Leonard Pennario's friend Doris! Whenever Doris and I talk we talk for a long time and I can talk to her while I make my Thanksgiving pie crusts.

The 1964 'phone will be going into the bedroom. Three 'phone jacks, three dial 'phones. That is what God intended!

It is great having exclusively dial 'phones. Number one I no longer have to listen to that ear-splitting ring my old Big Lots 'phone used to have. I get that robust, musical Western Electric ring.

Secondly on the old 'phones it is easier to hear than on my cheapie Big Lots 'phone, which I bought when I was in San Diego with Pennario. On the Big Lots 'phone the volume was really low and I could hardly hear people talking to me. If Howard walked in and stepped on the squeaky floorboard it would drown the person out. This is a problem if you are interviewing someone, which I often am. I make all my Leonard Pennario calls on this line. It will be nice to be able to hear these people.

And this is one more thing. Just now I was downstairs and the new long-cord 'phone rang. And it was the robot from CVS calling to tell me this scrip I had ordered was in.

The first thing the robot did was to boss: "If this is the right number, press 1."

And I just stood there! I could not press 1 if I tried!

No more bossy robots for me!

And after a moment of silence the robot just went on, accommodating me and my dial phone. I liked that.

From now on the world will have to work around me.
Posted by Mary Kunz Goldman on November 21, 2009

The hearing part is something I can really identify with. My ears were ruined by loud music from age 14 to 55. Working in the Norfolk Naval Shipyard rebuilding ships did not help them either. But what I did was get a cordless which hooks to a line and AC, then got a mic-earphone headset that plugs right in to it. Plenty loud with less than full volume. Portable too.

Should you ever NEED to have touch tone features, they sell a converter that connects to rotary phones. As the pulses pass into the converter, they come out as tones. So dialing "1" will be the same as pressing "1". They even have ways to use * and #

I love old things but this is over the line. My finger always gets stuck in the rotary and the phone lifts up and bangs on the desk and makes a scratch. I wouldn't mind the very old version where you pick up the receiver and the operator is on the line. Operator give me Jesus on the line! I love that song

A phone that does not access the Internet, how exotic! (Turns it over hoping to find a screen at the bottom...)