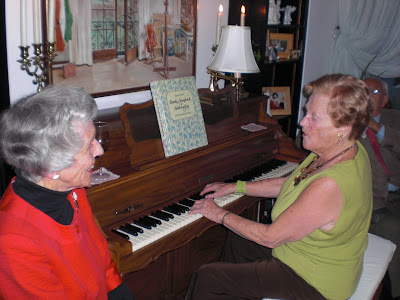 Over the weekend we went to a party honoring our friend the cabaret artist Ruth Killeen. Above is a picture of Miss Killeen entertaining.

Howard took over after her set. Here is Howard at the piano of Peg Keane who was the hostess of the party. 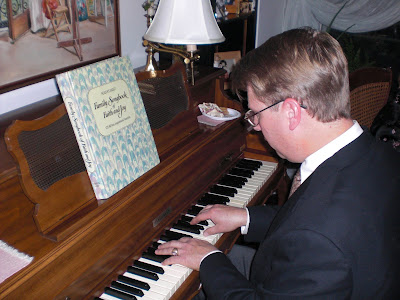 That was fun! One woman who had the wonderful name of Aleta brought homemade truffles made out of Belgian chocolate. Aleta is married to Ruth's masseuse. This is the crowd I run with now. A gentleman named Freddy is a friend of Ruth's from backgammon. When I am through with my book on Leonard Pennario I am going to join them one day for backgammon.

I do not know when the last time was I met someone named Freddy! It is like out of "Gigi."

It is not like the name Yuri or the name Abdul-Rahman. Those Yuris and Abdul Rahmans, they are everywhere! But Freddys! They are rare.

Other great excitement to report: In the church bulletin today they list the Masses for the week and next week and next Sunday's date, that would be Oct. 25, you can see the Mass for Leonard. It says: Latin: Leonard Pennario By Mary Kunz Goldman.

It is as if the book is already done!

One more item to report. Yesterday I went to four (4) sales with my mother. And I did not come home with one (1) thing!

This was the first time ever I came home empty-handed!

My mother bought all kinds of stuff and I had to help her get all her purchases into the house. She bought a brass headboard for a full-sized bed and a pack of beads for some project, I forget what. And a bunch of books. And a little pot about an inch wide that you can hold over a burner and melt butter in.

Not only that, but she informed me that my Mass for Leonard is not his first. Unbeknownst to me my mom has been ordering Masses for him to be said by the Oblates overseas.

That is my mother.

Next to her I am always a step behind.
Posted by Mary Kunz Goldman on October 18, 2009