The spirit of the steer, and other hauntings 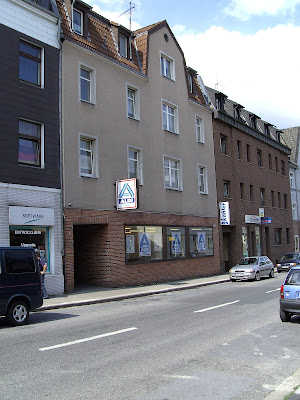 Pursuant to yesterday's mention of Aldi's, my Facebook friend Steve Cichon took time out from his radio duties to do research. He discovered that Aldi's is short for Albrecht Discount. They took two letters from each name!

Not only that, but the company is divided into two parts. One is Aldi Nord, meaning Aldi North, and the other is Aldi Sud, meaning Aldi South. Our Aldi's, judging from its sign, is part of Aldi Sud.

At the top of this post is the first Aldi's. It is in Essen, Germany! Essen is famous for its steel industry. My Uncle Bob said that during the war, by which he meant World War II, Essen was always catching it. He said you would hear it on the list every day. They bombed the heck out of Essen. But luckily they did not bomb the Aldi's! 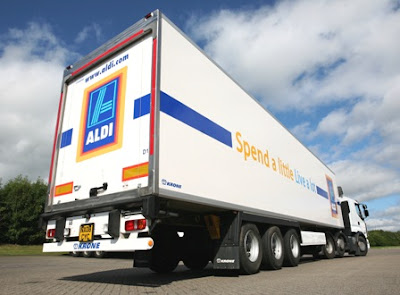 What am I doing looking at pictures of Albrecht Discount trucks? I have so much work to do. This music professor who knew Leonard Pennario is calling me in a little while. We have much to discuss! And also I have this Eye of Round roast to get into the crockpot.

Has anyone cooked an Eye of Round roast? They had a buy-one, get-one deal going a couple of weeks ago so we got two. I got one and my mother got one. I froze mine because I had too much going on at the time but my mom cooked hers and it turned out great. So I know this is a good cut.

It is three pounds! That is a big Eye of Round roast.

So I am looking through cookbooks. One cookbook I am looking through is "Fix It And Forget It." It was a wedding present and it is the greatest thing, this mishmash of crockpot recipes from the heartland of America. I use it all the time. The only thing is, the editors do not seem to vouch for the recipes. They just throw them in. It is as if the book is a giant crockpot and they are just throwing in ingredients.

There is this one horrifying recipe for Pepsi Pot Roast. Just the name!

It calls for four ingredients: One pot roast. 1 can cream of mushroom soup. 1 envelope dry onion soup mix. And the piece de resistance, one bottle of Pepsi.

I feel a chill!

Surely the spirit of that steer, furious that you treated its earthly remains with such wanton disrespect, would come back and haunt you. Evil would come knocking on your door.

You would have to call the International Association of Exorcists!

Or perhaps take your case before the Congress of Exorcists. There is that too.

Yesterday I found myself thinking of what I had heard on the radio about exorcisms. Well, this was not a full-scale exorcism this one priest was talking about but it amounted to a banishing of an evil spirit. This was a priest in Tonawanda as I recall. Tonawanda, we have learned, is a very interesting place.

This priest said he was in the rectory one night and the doorbell rang and it was this group of kids from the neighborhood. He did not know them but they were all scared half to death.

They had been playing with a Ouija board! And they had tapped into something, was what had happened. Something that terrified them. Some demon! 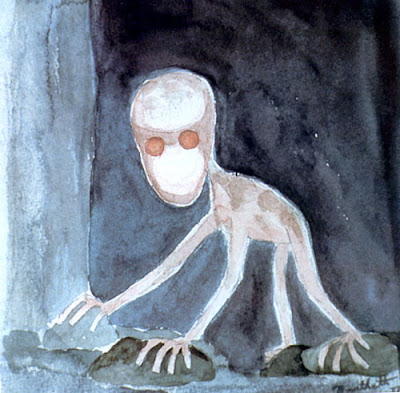 On the radio the priest calmly told of how he sat down with the kids and prayed and got whatever it was to go away. I do not remember if he went into more detail. What I think about the most when I think of this story is ...

Those kids must have been really desperate!

Here they weren't churchgoers or anything but SOMETHING HAPPENED that made them freak out to the extent that one of them spoke up and said, "Guys, there's this Catholic church down the street. I think we should go there and ask the priest to fix this."

And then the rest of them readily agreed. "Yeah, man, that's a good idea."

I would love to have been a bug on the wall when they made that call, to go down the street to St. Amelia's or wherever.

Or maybe I would not have liked to be there.

That must have been awfully frightening!
Posted by Mary Kunz Goldman on October 07, 2009

Essen & munitions reputation: Mahler's terrifying 6th symphony, with it's marches, phantasmagoria and hammer blows was premiered in Essen in May 1906. Leo Smit once said to this writer that he thought of that piece as a prophecy of the Shoah.

Each member of the Catholic church is exorcised during the sacrament of Baptism. Devil be gone!!!!

Egads! What a picture! That haint looks like poor Casper after having been run over by a train!

Exorcism... isn't it easier to just 'put on the armor' in the first place? People get exactly what they choose.

I hate to admit this, but not only have I heard of Pepsi Pot Roast, I've actually eaten it. It's one of my mom's favorite recipes. Maybe she owns that same cookbook.

MY mother always used to roast eye round!

Maybe it should be called pop roast

I agree, Howard. However, it won't make the idea of cooking with Pepsi any less frightening.

Would it be less frightening if it was made with Coke instead? How about Dr. Pepper Pot Roast? ... I thought I just made up the idea of cooking with Dr. Pepper right now, but after consulting the internet, I've found that Dr. Pepper Pork Roast and Dr. Pepper Pork Chops seem to be popular recipes. Seriously.

OMG! Julia Child must be doing somersaults in her grave.

I'm with you, Michelle!

Bonnie, what a wild story! I want to tell that on the Web log! Also my Eye of Round turned out well NO THANKS to all this unholy talk of Pepsi and Dr. Pepper and Julia Child somersaulting in her grave...

Mary: When you light a candle, you cast a shadow.