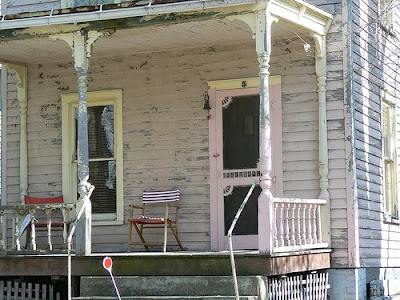 Such a spooky story that my Facebook friend Bonnie told yesterday! Bonnie wrote:

Stay away from those Ouija boards, Bonnie!

Bonnie, she is wild! The other day in a comment she indicated she also went to Lily Dale and had stories. What stories, Bonnie? I will go on and lecture you to stay away from Lily Dale too but that does not mean I do not want to hear the stories.

Last year in October I wrote from time to time about my own experiences at Lily Dale which, trust me, have concluded. Note to out-of-towners: Lily Dale is a spooky little spiritualist hamlet not far from Buffalo. The streets are all lined with crooked little faded Victorians and mediums hang out their shingles. That is a picture of a Lily Dale house up above. It is a typical Lily Dale house!

Everyone in Buffalo has been to Lily Dale and you can always get into debates with other Buffalonians about whether the mediums -- media -- in Lily Dale know what they are doing and are really getting messages from beyond or if it is showmanship.

Once when I was getting my fortune told the medium yawned. That is how exciting my life is!

That was the day when three of us from the paper went up to do a Hallowe'en story and were rating the media and their accuracy and their performances. I had to put in the paper that the medium yawned. I just had to.

Now this is funny. I had to go to two media and the one that did not yawn, I remember she told me something about initials. She told me that I was going to get involved in a project with a very elegant person and it was going to be very successful. And she gave me initials and I am 90 percent sure they were L.P. I seem to remember that because I was expecting her to give another person's initials. And they were almost the initials I was expecting but they were not.

So, those initials, L.P. I am ashamed to say that sometimes when the book on Leonard Pennario seems to be slow going, I think back on that and it reassures me that everything will turn out OK.

As soon as I think that I get mad at myself. Because I feel ashamed of having gone to Lily Dale and listened to these people. I feel bad that I did not know better. I do not want or need assistance from the dark side, that is for sure!

That is how my mind goes. Meanwhile there is this tape sitting around somewhere. I do not think I should let myself listen to it.

It just occurred to me that I had probably written about this initial business before, last October. So I looked it up. And I had! I even used the same phrase about assistance from the dark side, how about that?

And here is the thing: I wrote about it exactly a year ago today!

"...two media..."?
Don't know why--it may even be correct--but that was a bit of nails on the old grammar blackboard. "Two mediums" may sound a little declasse, but I'm going with it.
Let me know how your medium colleagues vote.

Your rant and your picture of the community I grew up in and now raise my family in is simply an prime example of a dark and empty mind. Which is yours. There may be mediums here who are not very good, I certainly wouldn't argue that point. But, after reading your blog and your column in the News, I wouldn't argue with the fact you're not a very good writer.

Bob, you are 'the prime example'.