Where the bones are buried 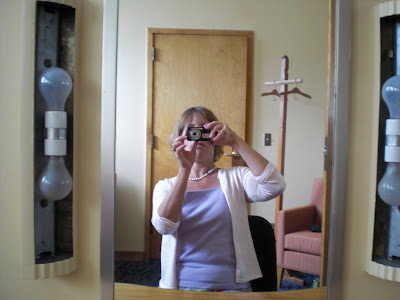 Son of a sea cook! I have not written today until now in my Web log!

That is my new saying, son of a sea cook. That is what my friend Steve Cichon said his grandmother used to say. Steve Cichon is an announcer on the radio so he knows a thing or two about which words work and which words do not.

I did not write today in my Web log because I had to run in the morning to, ahem, take the stage at Kleinhans Music Hall. Here is a picture I took from the stage. It is fun to see how it looks from there! 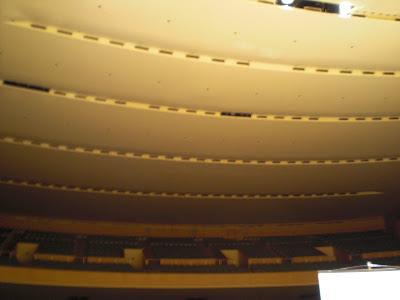 And this is the greatest: I got a chance to prowl backstage. Which, I almost never do that. The only other time I can think of that I was backstage at Kleinhans was when the Guarneri Quartet was here, remember? But that was across the lobby at the Mary Seaton Room.

This time around was magical because first thing, I walked back there and this man named Charles was sitting at a desk. He told me his name was Charles. I have seen him on stage! Howard and I always see Charles moving pianos and things on and off the stage and we have often thought that if we could get him talking, what stories he could tell.

I said that to Charles. He did not agree to an interview but he admitted he would make a good one.

"I know where the bones are buried," he said.

Then Charles showed me people's dressing rooms. I got to brush my hair in Michael Ludwig's dressing room. He is the Buffalo Philharmonic Orchestra's concertmaster!

Next I got to see the guest artist's dressing room. This is the room given over to visiting soloists.

They still have old furniture that was specially made for Kleinhans Music Hall! I did not know that Kleinhans had its own furniture but it does. The furniture and accoutrements were specially designed in 1940 to go with the hall.

What that meant is that Leonard Pennario not only used this room when he was in town playing with the BPO, but he looked at himself in the same mirror I was looking at myself in. 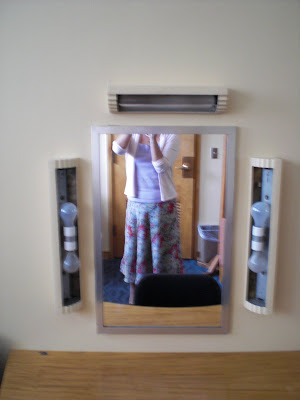 Charles said this mirror and the fixtures were original. He said they were bolted to the wall in 1940.

And here is the custom Kleinhans furniture Pennario would have seen and, perhaps, sat on. 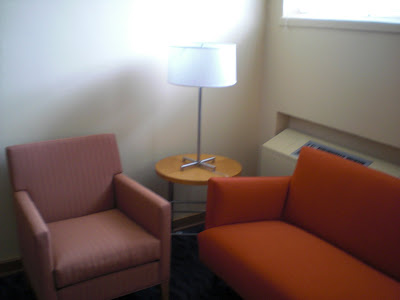 Well, the orange couch has been upholstered. My new friend Charles told me that.

I could not stop thinking of that.
Posted by Mary Kunz Goldman on August 21, 2009

My aunt likes to say "son of a sea serpent!" I'll occasionally say it as well. If you Google that phrase, there are only 6 hits on the entire internet. Maybe she just made it up herself.

How interesting. And it is getting old so let us hope it does not go the way of the Aud!

Me thinks Charles just might become your new best friend..... (I was wondering where you'd been all day. We're all keeping tabs on you, you know.)

Son of a seacook, I've been backstage at Kleinhans a few times.... very interesting place.

Not that this matters perhaps to you just now Mary, but that is "the dress", isn't it? And if so, this dress is no longer history. You are celebrating in it right now. Well, neither is Leonard Pennario history, so to speak, as you are enlightening us & celebrating his life w/in your blog daily which inevitably bings... you tell us.
Daughter of a Super Mom

The news once did a story on places you don't get to see.
Backstage at Klienhans would be a great place to start that story over.
I bet Kleinhans doesn't have to re paint the guest artist dressing room like Shea's has had to.

Mary...if only I had known that Leonard Pennario used the same dressing room where I sat (on the orange couch!) and practiced my script for Tubby the Tuba. It was one of the great thrills of my life to have my name posted on the dressing room door -- my husband took a picture of me pointing to it! Bet you never thought you'd be reading about Leonard Pennario and Tubby the Tuba in the same sentence -- but it's true!

Hi Jacquie, I miss seeing you on TV out here in LA!

WE miss HER right now in-la-Bflo./Niagara market TOO!?! Don POSTLES has been holding down-the-fort this week at TV-4! Is Frtiz Coleman STILL la Weather guy at KNBC?!?

Son of a chowder-making sea cook, what an image I have of you, Jacquie Walker, sitting on that couch rehearsing "Tubby the Tuba." This is the kind of thing novelists try to make up and can't. Send me the pic so I can put it on my Web log!

And Toni, that wasn't the Dress, though it's so nice of you to remember that! But the pink sweater I was wearing was one garment I got at one of those garage sales last week with my mom. So you were close!

I had a similar mirror incident recently when I went to the Sparkle & Twang exhibit at the Gene Autry Museum (which is across the street from the L.A. Zoo in Griffith Park). They had a "train case" (a makeup case for those traveling by train) that belonged to Patsy Klein and as I was looking in the mirror inside the top flap all of a sudden a video of her singing "Crazy" comes on the monitors which got me wondering if she ever sang the song to herself when looking in the same mirror.

Mark, that is a haunting image!