Who gives a fig? 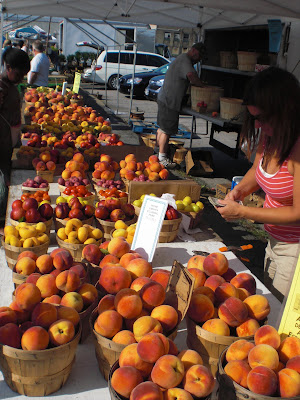 Today for the first time this summer I slipped out of the house before Howard was awake and I went to the Clinton-Bailey Market. Well, I went with Howard's blessing. He wanted me to go to James Desiderio's which is around the corner from the Clinton-Bailey Market because yesterday he got his hair cut at the Ellicott Square Hair Salon and Sam, the salon's owner, told him that if you can get to James Desiderio's before 9 a.m. on Saturday you can buy figs cheap. But if you get there after 9 a.m. it is too late!

So Howard had these visions of figs and he asked me to go get them. Therefore this morning I was up at 6 a.m. as usual to work on my book and at 8:40 I was in my car, headed to James Desiderio where these figs were to be had. It was a funny feeling because my mind was still in 1941 which was the year of Leonard Pennario's life I had been working on.

Alas, no figs. They did not have them today!

So I walked over to Clinton-Bailey. Everything looked so beautiful and that is where I took the above picture.

In this picture you can see in the background the mighty Niagara Frontier Food Terminal! It is one of a historic set of art deco 1930s industrial buildings that we in Buffalo gloat over. 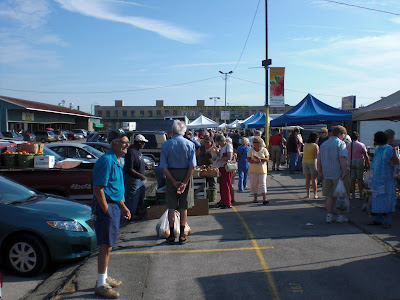 This one farmer had the most beautiful beets and everyone kept stopping to say "Aaaah" and gaze on them with delight. Even people who would not normally buy beets were stopping and asking about them, and many conversations sprang up about how to cook them. The beets were only $2 a bunch. Who could resist them? Not I! 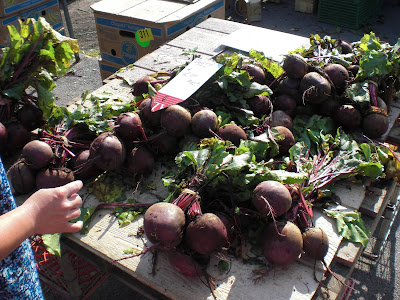 I ran into my brother George and he and I split a big basket of tomatoes. We were going to pay $10 but then we looked around and found the same size basket for $8. We started toward that basket when this older woman stopped us.

"There's a black man down that way selling them for $5," she said, pointing.

Ha, ha! That is so Buffalo. She did not mean any race business. As the late Michael Jackson put it, it don't matter if you're black or white. She just wanted us to be able to identify the farmer selling the $5 tomatoes. George and I went and found the black farmer and sure enough, his tomatoes were only $5 and that is what we bought.

Alas, this plant was not for sale. 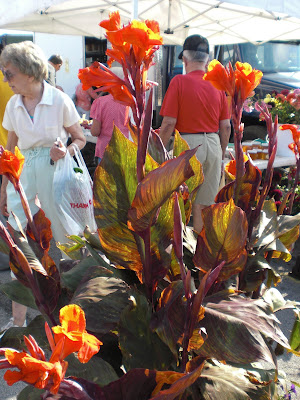 But ah! What peachy peaches! 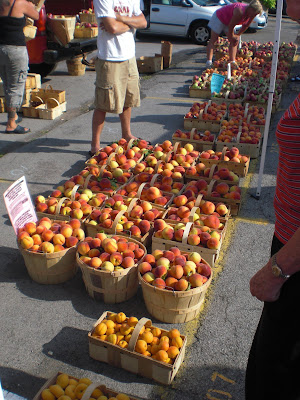 Even plain potatoes can be beautiful. I love the shadows they cast. 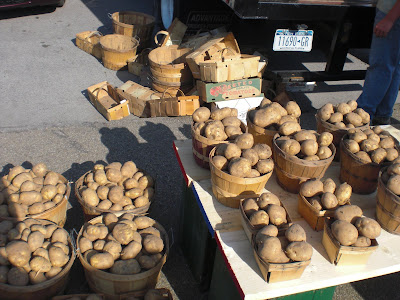 When I had bought pretty much everything at the Clinton-Bailey Market I crossed the street to the art deco buildings I mentioned and shopped at Willowbrook. Here is something nice about Willowbrook. They were playing great music, in the store and piped outside. It was a jazz pianist, playing "Easter Parade" and "Cheek to Cheek."

They were playing "Alexander's Ragtime Band" when I took this picture of the trim on the building which I admired. 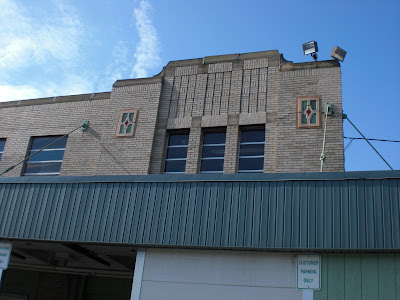 Then I took this picture of the Willowbrook building. 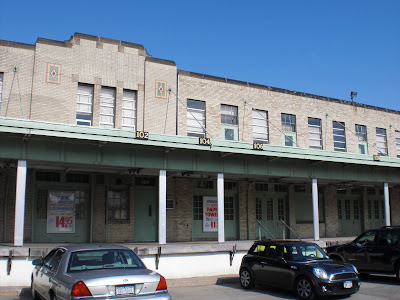 Why do people go to supermarkets? This is so much more fun. Yesterday I went to the Hertel Farmers Market and let me tell you this, they came running out to my car when I was leaving to tell me they overcharged me a couple of bucks for my squid. Would they have done that at Tops or Wegmans? I ask you.

Thank you, farmers, black and white! Thank you, Clinton-Bailey Market!

After leaving the market I went home and ate beet greens and Swiss chard and then I went garage-saleing with my mother. There is a story I have to tell about this woman on Berwin Drive off Getzville who did not want to talk about Leonard Pennario.

But that is another story for another day.
Posted by Mary Kunz Goldman on August 22, 2009

My beets are puny compared to those. But my broccoli and green beans are lovely.

We have the "Red Barn Flea Market" near us, in Bradenton, FL. The flea market has nothing but trash, but the weekend brings the Mexican farmers and their magnificent produce. There's nothing like a $2 pineapple, and carton of banana peppers for 75 cents. The topper is the miracle of food that is the taco trailer, where the tacos are simple, with just some meat, cilantro and lime juice on housemade tortillas. Muy Bueno!

How do you peel a beet? I want to use them in my juicing, and it was suggested I boil them for 20 minutes, but that doesn't seem to do it. Do I, in fact, HAVE to peel them? Ay me, it causes me to hold my head and say, "Zut alors!" son of a seacook that I am!

You Buffalonians are always bragging about what you have that others don't, but the Clinton-Bailey market? Truly, world class. I wonder just how many people in Buffalo realize what a rarity it is.