Stranger in the night 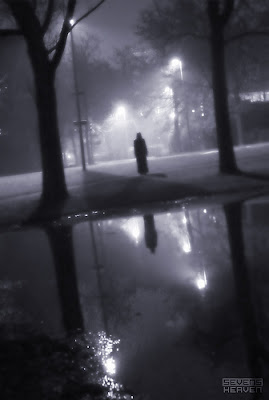 There was something else that happened at the soup kitchen yesterday that was funny and that I did not think to write. I was too angry at the slug complainer!

The office volunteer, Jim, told me this story.

He said a guy had showed up at the door earlier with a woman and a child. Jim began to tell them that the shelter does not take families. But it turns out that no, this woman is only a friend. She is taking this guy around and translating for him because he speaks no English.

OK, fine. There is a bed available, so Jim sits the guy down, begins taking down his information, starting with his Social Security number.

The guy has no Social Security number.

"Everyone has one," Jim says. "You get it when you are born."

It ends up the guy is not a U.S. citizen. The woman explains that. So Jim starts in on other questions. How long have you been in this country? Where did you stay lastnight? That sounds like a blues song! But it is a question we ask at the soup kitchen.

The guy and his friend are very friendly and cooperative as they answer all the questions but one thing is puzzling Jim. He cannot figure out what the guy is doing in America.

Finally the woman understands his confusion and ends it.

She explains, "He is on vacation."

Ahahahahahaaaa!! Jim explains politely that we do not take people who are on vacation. And they accept that and thank him and leave.

Where do we begin?

Perhaps they thought the shelter was a hotel.

Perhaps they thought it was a fine restaurant. A misunderstanding that does not surprise me considering the aromas that were emanating from the kitchen thanks to me and my Caribbean ham and black bean stew.

But imagine if the guy had been admitted! Howard and I were laughing about that later.

Imagine what he would tell his friends at home:

"There was this weird place I stayed at in Buffalo! You ate in a communal dining room. And there was only one thing on the menu. And besides the guy who signed me in, the chef was the only normal person in the place. And even she, all she would talk about is a pianist I never heard of named Leonard Pennario."

Here is the only thing I can think of. This is a Catholic soup kitchen and there are crucifixes and statues all over the place. Like this statue on the wall visible behind the big white head of lounge sensation Guy Boleri. You cannot quite make it out in this picture but I believe it is St. Francis. 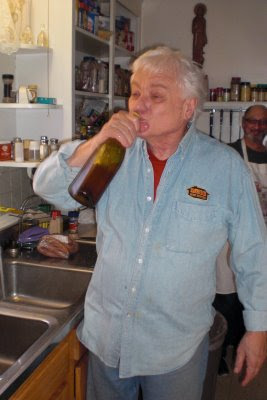 Maybe the guy yesterday thought it was some kind of a monastery. Sometimes when you are traveling you can stay in monasteries. I have never been savvy enough to do that but some people have.

Another day, another puzzle.

In my days of living and working in Allentown, I used to encounter many foreign travelers who stayed at the hostel downtown.

A large percentage of them looked and smelled like they would fit in at a homeless shelter. Thus, I can't say that your story surprises me too much. Perhaps the hostel was full, and they were looking for comparable accommodations.

I am betting that the fumes got him!