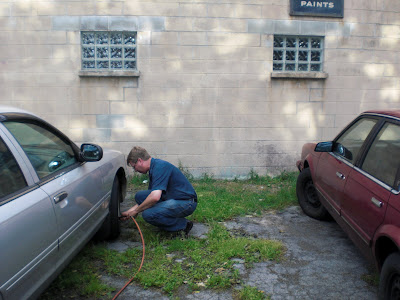 Today, that funeral for Michael Jackson! Can you believe it?

What is with these people?

I have this theory that the problem is that most people are not religious any more so they need something to fill the void and this is it. They get to scream and cry and feel they are part of something.

There is no other explanation for this hysteria! I am sorry but it is true.

Now, hysteria over Leonard Pennario, that I could understand. But zut alors, not this.

Luckily I have my priorities in order and I know what is important. What is important to me right now is my car inspection. Preparations start now, even though it is still good for three more weeks!

Yesterday I took my car by Goldman Motors and Howard replaced my registration sticker which I have been carrying around in my glove compartment. Then he filled up my tires. That is a picture above of Howard filling up the tires. A prince among men!

Goldman Motors is the name of Howard's garage and office which is on the border of historic Black Rock. It is near the Pierce-Arrow plant.

The Pierce-Arrow plant is one of the great long buildings of the world. 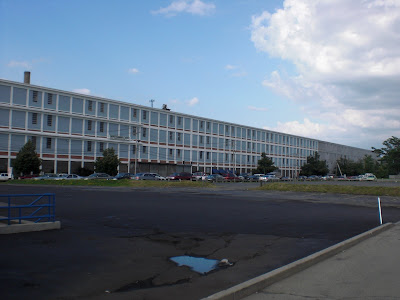 In the long buildings department it is rivaled only by World Auto Parts which happens to be right next door. 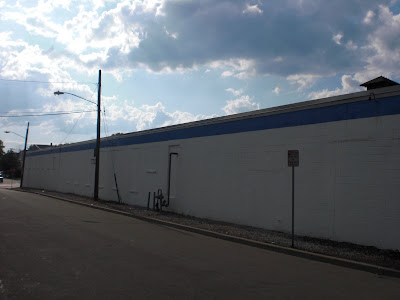 At Goldman Motors we treasure our proximity to these architectural wonders. The time flew as Howard looked over my car. 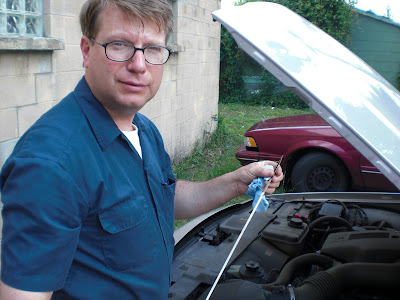 I have to go back to Goldman Motors this weekend so Howard can check my brakes. After that he is going to go with me to get my car inspected because last time, a year ago, I went by myself and it ended up costing me $1,500.

Make that $1,500.50 because they took so long replacing everything and changing every single fluid that I had to kill time by going to Goodwill. And I found a record of William Kapell playing the Khachaturian Concerto and paid 50 cents for it.

Leonard Pennario had just died and I thought about that as I walked back to the garage where my car was being inspected. I was wishing Leonard were alive because then I could have told him about this record I bought. Leonard would have loved that, I remember thinking. He would have loved that I found his buddy William Kapell at the Goodwill and not him.

It was blazing hot and a guy pulled over and asked me if I wanted a ride. That is another thing I remember. Who can resist a gal walking along in a sundress and sandals carrying a William Kapell record? He could not, that was for sure.

Wow, that was a year ago!

Anyway this year I cannot go unaccompanied to get my car inspected because look what happened last time. So I will be spending some quality time at Goldman Motors in the next week. Here is one more picture. It is of Abu Ghraib! 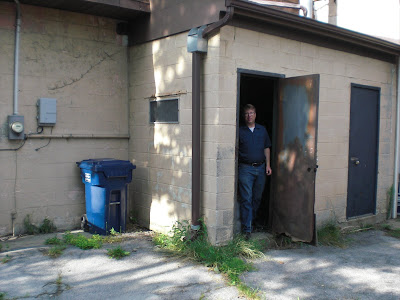 Abu Ghraib is the sinister part of Goldman Motors where there are these two dark doors leading into cinder block cells.

Here is a closeup of one of the doors. 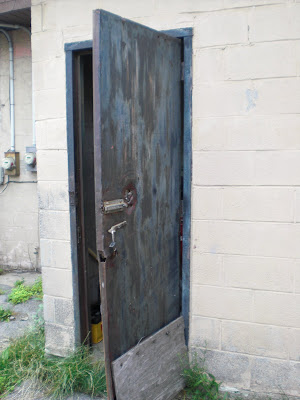 Speaking of Abu Ghraib I am a prisoner of my Web log. I must away and get on with my day. Much as I am reluctant to.

I heard that Howard was seen 'Moonwalking' while on his way to put air in the tires. Well, I guess I will cut him some slack today.

Pierce-Arrow... There is an old (1935) blue Motor Manual around here somewhere that has those old cars in it. And about a dozen more that no one has heard of! :)

I always have good luck with getting an inspection at Fast Track Quick Lube. They don't actually repair cars, so they can't try to sucker you into any unnecessary repairs. And I've never had them try to offer me any extra fluid changing services while getting an inspection.

Mostly, it just comes down to whether or not your car passes the emissions test. And if it doesn't, well, then you're in trouble. But at least you won't feel like your car is being held hostage there. You can then take it to a reputable mechanic.

I also have a good mechanic, but I don't go to him for inspections, because he's usually much too busy to be bothered with such things, and I'd be stuck there for 2 hours.

Prof. G, who are you kidding? You are indifferent to nothing! That is your charm!

Larry, only you would be cool enough to have a 1935 blue "Motor Manual" around here somewhere.

Ryan, that is a good idea, Fast Track Quick Lube. It would be worth it just for a picture for the Web log!

Not as cool as I wish, Mary. I grew up with a Dad who was an auto mechanic and built race cars. It was his book. There is also a 1948 one. Very interesting to look through them.

Back when I was around age 4 (guessing here) my parents got me one of those little cars you sit in and pedal for Christmas. They told me that the first thing I did when I got up and saw it Christmas morning was to lie down on my back and stick my head under it. Well, that is the way I always saw my Dad, lol. Just feet sticking out from under some car! RIP, Dad.

Who is Leonard Pennario? Never heard of 'im. On the other hand...