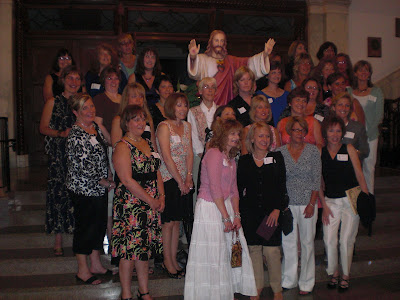 Last night I went to my high school reunion. What a trip that was!

My high school is the Buffalo Academy of the Sacred Heart which was founded in 1877. There were about 100 girls in my graduating class and about 30 of us came to this reunion. That is a good turnout! It is not easy to go to your high school reunion because you are never sure who you will remember and who you will not. And you risk embarrassing incidents in your past being dug up. Well, I do, anyway!

Anyway, many people do not rise to the challenge and I have to admit, I almost did not. I have had such a hectic week, to the extent that I am not even sleeping. But on Friday even though I had been up all night, I sat there with my coffee and thought, I am going to my reunion!

There will be other reunions but this is my one chance to go to one with braces on my teeth. Plus I could drag Howard. Plus I had not walked into Sacred Heart Academy since I walked out of it in 1979.

It had to be done!

Naturally I had not sent in my money or my forms. So I had to call the two gals in charge of the reunion and grovel. They were nice to me and allowed me in last minute.

So. Last night there I am. And you know what, the school looked exactly the same. There was the statue of Christ that you see as soon as you walk in the front door. The motto of Sacred Heart Academy is Christus Super Omnia. It means Christ Above Everything! Or "Christ Uber Alles" in German.

We dined in the Library which is beautiful and dark and paneled the way it always was. Our favorite teacher, Sister Maria, made a speech. Sister Maria is the phys ed teacher at Sacred Heart and she is legendary and the heart and soul of the school. And we all got weepy!

I was so excited I could not eat much. All I could do was drink wine. That is a dangerous situation. I mean, look at the last time that happened to me, which was the night I met Leonard Pennario. I wind up following this guy home to California and now I have to write this book. Thank you, Mr. Robert Mondavi!

What happened lastnight was, after dinner, we got a group picture taken in front of the Sacred Heart statue. That is a picture of us up above. The photographer marveled that Christ blended right in with us. It is the truth!

After that my friend Anne and I went off into the empty Auditorium and listened to Howard play the piano. 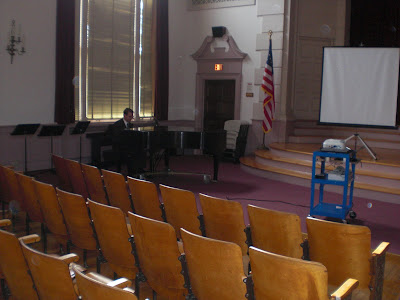 While we were sitting there we had the bright idea to call the valedictorian who was a no-show at the reunion. Her name is Gail. She was a good friend of ours. We had not talked to her for 30 years and did not know where she was but they handed out a list lastnight and she was on it.

Some guy answered the phone and I asked for Gail.

Ha, ha! This was fun! Gail got on the phone. "Is this Gail?" I said. She said yes suspiciously. Gail always was the suspicious type. "It's Mary," I said. "Your friend from Sacred Heart! How are you, Gail? I'm here with Anne here in the Sacred Heart auditorium. We just dined in the library! We were thinking about you, Gail!"

And Gail laughed and she still had the same laugh!

"Who was that guy who answered the phone?" I said. "Was that your kid?"

She said it was her husband.

"Ha, ha!" I laughed. "I don't have kids either and neither does Anne."

"I work at the paper," I said. "I am the music critic. Our old critic retired and I got his job. What are you doing? Where do you work?"

"I work for the government," Gail said.

I was repeating all her answers to Anne and we laughed happily knowing Gail had a job that was classified that she could not tell us about. That was our Gail!

But what if she meant she worked in classified advertising? That just occurred to me. At The Buffalo News if you say you work in classified that is what it means.

These are questions that will have to be answered.

We rattled Gail's cage for a while more and then we hung up and began wandering the school. The Pillow Room, Room 206, is now full of computers. That is a loss. And the bathrooms had new sinks with automatic faucets. I got to see my favorite bathroom on the first floor where we used to have snowball fights. You would walk in and the window would be open and the whole place would be full of snow and it was acceptable to throw snowballs into the stalls at whoever was sitting in there.

But zut alors! Someone blacked out the tooth of a big cardboard cutout of President Barack Obama! 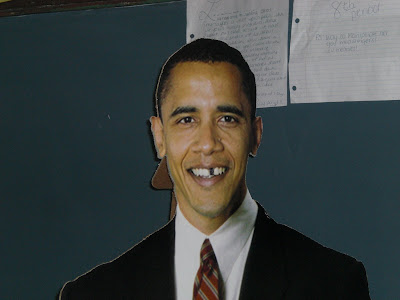 Imagine that. Who would do such a thing? 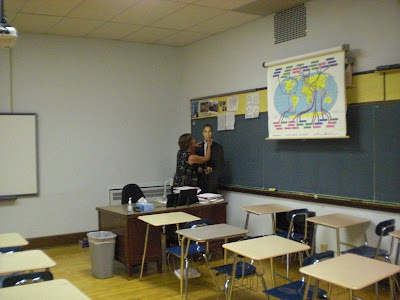 That is what I said about too much wine. Alas. Zut alors!

I was thinking of going to this morning's Alumnae Mass and breakfast but I was awake half the night because I could not sleep what with all this excitement. So I went to my ordinary Mass at St. Anthony's, I confess. Because it was Trinity Sunday the Mass ended with the Te Deum.

I have had a weekend to remember.
Posted by Mary Kunz Goldman on June 07, 2009

Reunions are wonderful but the older you get
more of your classmates have bit the dust.