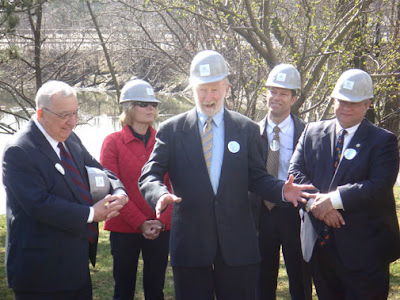 Hardly any time to check in because my feet are being held to the fire for a story that is running tomorrow. It is about Jesse Kregal, the timpanist of the Buffalo Philharmonic Orchestra! That is Jesse Kregal in the picture above, in the middle. Note to out-of-towners: Buffalo is a wild place! Even our orchestra musicians wear hard hats.

So I have only a minute to write but I must. Because there is great excitement. I was quoted on the Tom Bauerle radio show.

Unfortunately Bauerle did not quote me about Leonard Pennario. He also did not mention my name. But we take what we can get and any mention on the Bauerle show, however peripheral, is an honor.

Today Tom Bauerle is talking about ethnic jokes because the paper ran a big story about the School Board president in Lew-Port who forwarded a whole bunch of jokes that are considered racist and sexist.

Did I really say that? I do not remember saying that but if Howard said I did, I must have.

Anyway, Bauerle read that on the air. With "The Wife" and everything.

Didn't Mark Twain once write "There is no humor in Heaven."?...Meaning the secret source of laughter is pain and ridicule, not the bliss of paradise. I'm as far to the left as you are to the right, but I'm mighty tired of the sloganism of politically correct speech. It's just one more barrier between people, you krautsmasher!