The miracle of the lost wine 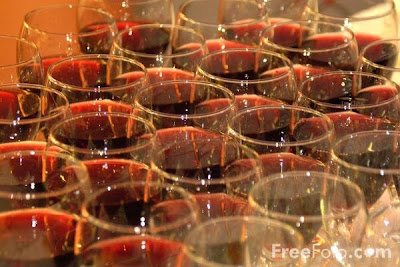 On his way back to Italy after the death of St. Francis (3 October, 1226), St. Anthony traveled through Provence where, tired from travel, he and his companions entered the house of a poor woman, who placed bread and wine before them. She had forgotten, though, to shut off the tap of the wine-barrel -- and as the wine was running out, one of Anthony's companions broke his glass. Anthony prayed, and the wine barrel was filled up again and the glass was made whole.

Ha, ha! Saint after my own heart! No wonder St. Anthony is the patron saint of lost objects. He restored the lost wine!

I will have to tell my friend Gary about St. Anthony's wine miracle. Gary and I always joke about how we are going to take a trip to the Finger Lakes where there is a winery that advertises the All-You-Can-Drink Wine Spigot.

"We are so there!" I remember Gary laughing.

There is also this other famous story.

But anger was building up inside of him. Because when we dropped him off, he burst out: "Do you think at all what you are talking about?" And we admitted we did not. And he said: "Ninety percent of your conversation was about alcohol!"

Then we were dying laughing because it was true!

We thought back on what we had talked about. We had discussed the bars we had been at in Toronto the night before. Then passing through wine country ... 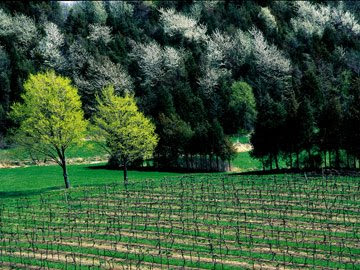 ... our thoughts had wandered into if we could ever open a winery, and what it would entail, and how much money you would need, and where the winery should be.

Then we compared stories about wineries we had visited.

Next we began bragging to each other about booze we had smuggled into places where you were not allowed to bring in any alcohol. And we began swapping stories of how it could be done. There was one time about three years ago that I was at this bone-dry Southern folk festival. And I managed to get through the gates with seven cans of beer and a box of wine! With guards searching my bags and patting me down! That was amazing and I will probably never top that. Looking back, I get like Leonard Pennario remembering his performances with Jascha Heifetz. I see it as the crowning glory of my career.

One day when I am in the running for sainthood someone had better bring this up as a miracle I performed.

When you are talking about things like this the time flies and before Gary and I knew it we were nearing the border. That got us talking about the Duty Free Shop and whether or not the liquor prices there were a good deal.

And so the ride went!

No wonder Guy was ticked off! Besides which he is a Buddhist and Buddhists are uptight. It is funny because they are supposed to be into meditation and everything but they are some of the most uptight people in the world, I am sorry.

I know for a fact that if you showed the Dalai Lama a wine barrel where the tap was left running by mistake he a.) would not recognize the seriousness of the situation and b.) even if he did would be unable to fix it.

Saint after my own heart!
Posted by Mary Kunz Goldman on June 12, 2009

Unlike Christianity, Islam and Judaism, I've never heard of Buddhists waging war and slaughtering people to impose their beliefs. Maybe the lesson of the miracle of St. Anthony is: Non-drinkers, get lost!

Oh my! You are cracking me up! Wonder how you smuggled all that booze. All I can think of is under a dress?

Anyway, about it being too early to think about wine, consider my attitude back in the 70s when I used to imbibe. When someone said to me that it was too early to drink, I used to reply, "Well, I like to wait until I wake up." Go figure!

I used to work for one of those uptight AA members-turned-sponsors. I always loved his story about when he realized that he had a drinking problem. It went something like this:

"I used to think that just because drinking wasn't causing problems with my family, and I didn't have problems at work, and I never had problems with money, that I didn't have a problem. But then one day, I was putting some empties in my garage, and I thought, 'Gee, what would the bums think if they saw how many bottles I have out here?' And that's when I realized I had a drinking problem."

It comes to my mind that in some villages in northern Italy, during their summer festivals,
wine is piped out at the public fountain. The spigot is left open for the many thirsty people.
Viva Sant' Antonio!