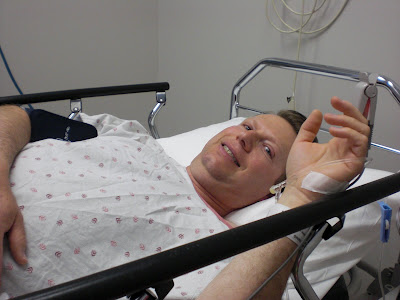 From Aldi yesterday we go to Kenmore Mercy!

That is where Howard went yesterday for his colonoscopy. I can put that, can't I? There was that comedian, Robert Klein, who came to Kleinhans Music Hall and performed with the Buffalo Philharmonic and he did a song titled "Colonoscopy."

Here is another thing about Robert Klein: When I had him on the phone and was interviewing him before his appearance in Buffalo, I had trouble talking because I had just gotten my braces on my teeth. This was about a year ago.

"Mr. Klein," I said, "I'm having trouble talking. I have braces on my teeth."

As I have said before I do not approve of people saying "Jesus" like that but I am sorry, I still laugh like crazy about that. I cannot help it!

Where was I? Howard and his colonoscopy. Howard was insanely brave and went through the whole procedure without a painkiller. They always give you a painkiller which was why I was with him. I was supposed to drive him home.

But he did not get the painkiller and he did fine. Above is Howard is after the, ahem, procedure. Ha, ha! It is fun being married to me! The world is invited into your hospital room, is one thing.

Here is Howard sitting up and feeling better. 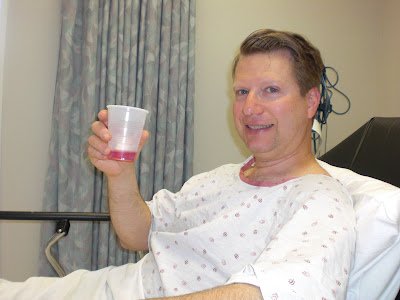 He got dressed and the orderlies admired his shoes. They are made out of horse! 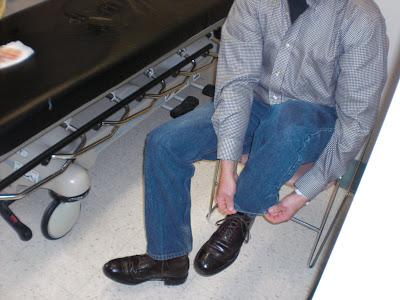 Then we went down to the lobby where Howard played the piano. What a man I married! Here he just had a colonoscopy and a few minutes later he is playing like Leonard Pennario. 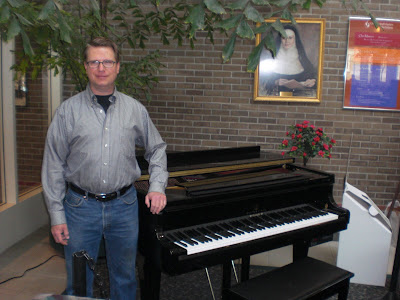 I love the picture of the nun. Here is another nun picture I admired. You would not believe the nun's name. It is Sr. Mary Mechthilde O'Connor! Mechthilde is a name you do not hear very often these days. That is for sure. 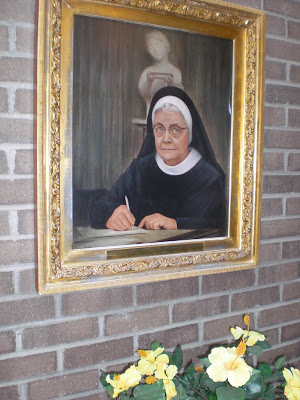 Howard told me that while his colonoscopy was going on he actually watched it. There were screens and a camera and he said you could see inside your body. I could never do that. I would faint.

I have a history of fainting over medical matters. People just start talking about operations they had, and I start feeling woozy and sometimes I pass out. Once at the dentist they were just explaining the procedure of getting two of my wisdom teeth pulled. And I fainted! That was not when I was a kid, either. That was just a couple of years ago.

Another time Howard's friend Jon Rosen was with us at the Hyatt and he began talking about an eye operation he had. And I started feeling all clammy and prickly and I had to go out in the hall and find a bench and just sit.

For a while I tried to practice so I would not get like this. Whenever any of my friends had an operation I would ask to hear about it. But it did not make things better.

Once I was reading a book by Joyce Carol Oates and I passed out. The book was "Wonderland" and there was a part in it where this woman gets an, ahem, female exam. Wow, look at this. Yesterday we were talking about oats and today it is Oates. What are the odds?

The GYN exam in "Wonderland" was graphic the way Joyce Carol Oates is. But I did not think it was bothering me. I mean, I was just reading.

Then I glanced at the clock. And I realized I had to get up and get to St. Gerard's. This was back when I was playing the organ at the 4 p.m. Mass. So I stood up.

And I passed out cold! Just fell on the kitchen floor. It is the truth! I will always remember that.

But Howard is different.

Happily, he is made of stronger stuff!
Posted by Mary Kunz Goldman on June 04, 2009

You may be the only person in the world to bring a camera to a colonoscopy.

Glad to know everything came out all right in the end, so to speak.

Way to go, Howard. No way could I have watched that. In fact, when I had one four years ago, my first, I had a deal with the doctor. It was to insure that I did not wake up! And, I did not. So, it was a non-event for me but that day before was quite a memorable experience!

Are you sure they did not give you something? If you were playing 'just like Pennario afterwards', well...

I remember mine. Did he lose weight from the prep?

I needed a laugh today and you gave me a big one in your discussion of "Wonderland." I found a lot of parts in that book that could make me pass out; Joyce Carol Oates' mind knows the darkest realms of hell, I think. And, of course, I knew Sister Mechtilde. Let's see who I know in tomorrow's blog!

Everyone, thanks for sharing the colonoscopy joy! Prof G., Howard does think he may have lost a few pounds.

Perhaps they gave Mary something, if she thought I sounded like Leonard Pennario.

Like most brave acts, mine was actually motivated by fear. I was more worried about being put under than the actual exam. Besides, what others call Hell, we New York State taxpayers call home! Bring it on, Doc!

Hmmm... Good point, Howard. Mary might have had the medicine by proxy. For sure, the kind they gave me could do something like that. There is no fear in me about being 'put under' but if I were to feel something crawling through my guts, I would be like Mary. The thought terrifies me. Anyway, good job, Howard. You are very brave!

And I have no doubt that you lost some pounds if you had a similiar prep to mine!

Howard -- you are such a remarkable person. You go grocery shopping right before your colonoscopy, you demand to be awake for the procedure, you wear shoes made of horse, you play the piano in the lobby for hospital guests post-colonoscopy...and then you score a smoking chair on EBAY. There's a reality show -- or a beach novel in there somewhere!