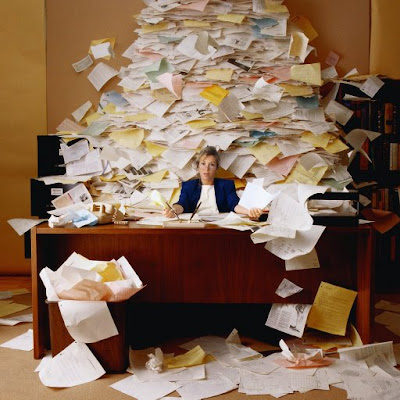 Today I finally got my act together to join the Music Critics Association of North America.

That is a picture of me up above, sitting at the Leonard Pennario desk working on my membership paperwork.

I had to assemble a whole sheaf of stuff including four (4) photocopies of bylined reviews or articles from within the last year, a completed membership form with a professional reference, and -- this was the kicker -- a resume.

A resume! When was the last time I had a resume? I had to write one from scratch. Well, now I have it. In this day and age you never know.

And making copies, that is a big production too. You are used to being able to email people things. I am thinking, this is so primitive! There was the resume, the copies, and also the check to be made out for $100 in case I get accepted. Tasks, tasks, tasks!

Plus you need a professional reference. Which, I put down Jeff Simon, an editor I work with. I have already bugged him into saying he will vouch for me. But zut alors!! I am licking this big envelope, literally, finally, finally ... 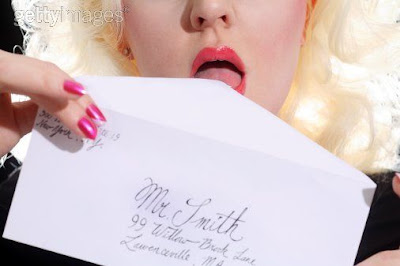 ... when I happen to glance at my laptop. And the Music Critics Association Web site is telling me that they need Jeff Simon's title and phone number.

What is his title? I did not even know.

And what is his phone number? I had written down his email and figured that was good enough. What is this, 1952? If so, can I go and catch Leonard Pennario's debut recital at London's Wigmore Hall? I am just saying.

So I had to stop licking the envelope and straighten all this out and that took another 10 minutes.

What about Licking County? 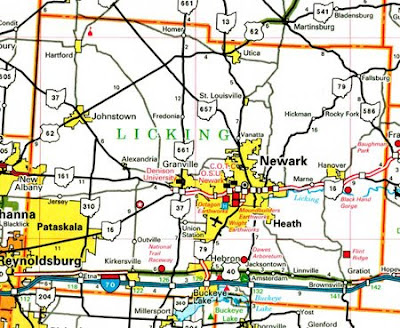 That is a county in Ohio where Pennario played once. He told me about that one day and we must have laughed for an hour. Here we should have been talking about Ravel and instead we are making jokes about Licking County. Oh, look! I found Licking County on the Internet. They do not seem to think there is anything funny about it. But we did!

And I wonder why I cannot get this book done.

That is really me in the picture above, licking the envelope. You can tell because the envelope is addressed to Mr. Smith who is Tim Smith of the Baltimore Sun, the president of the Music Critics Association.

It feel great to get this done. I am telling you, between everything I was doing and assembling, this big envelope addressed to the Music Critics has been in and out of my car for close to a week, going here and there. And it still has to get weighed and stamped and in the mail. So we are still not out of the woods.

Now watch them turn me down.

Perhaps there is someone on the membership committee who does not like Leonard Pennario. That is a situation I cannot imagine but it could happen.

Perhaps there is someone Pennario took a gig from or a girl from. That would not surprise me, I will tell you that.

Well, I will keep my fingers crossed. So far, I have to say, this Music Critics venture has been quite the adventure. Every once in a while you notice how dependent you have become on the Internet and instant gratification. I cannot believe when I actually have to mail something. Even this agent I have been in touch with, he just says to email him stuff.

I am always amazed when I cannot just push a button and it is done.
Posted by Mary Kunz Goldman on May 17, 2009

Oh my goodness! What a saga! Well, congrats on getting it all done, anyway. MKG@MCA yep, yep.

You generated an interesting question for me. Was Pennario a real 'ladies man'? Or do we have to wait for the book to know this tid bit?

And that 'paperwork desk'... it looks beyond cleaning up. Maybe a match? At least chunk in a few 'No Smoking' signs! LOL