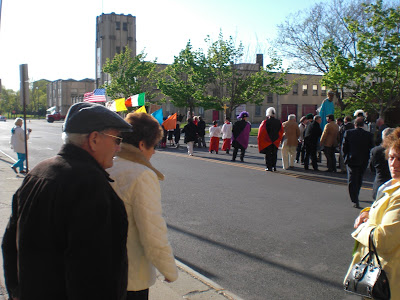 Buffalo is the Queen City and our patroness is Mary. Lastnight we did a Mary procession at my church. St. Anthony of Padua, which is downtown behind City Hall. Above is a picture of us!

Being the only religious extremist in my circle of friends I went on the procession by myself. I tried to get other people to go with me but they did not. I even tried to get Howard to go with me! He is not Catholic but I thought he would enjoy the aspect of this being a show of strength. Howard just about hung up on me.

Which, that was just as well, I thought later. Because this was not the sweetie May crowning procession I had thought it would be. It was intense! These Italians.

First they had this statue of the Madonna that they crowned at a short prayer ceremony beforehand. I had not known there would be a ceremony so that was another reason I was glad I was by myself. You do not want friends tagging along at these things because then you cannot enjoy yourself because you are always whispering apologies: I'm sorry the sermon is so long, I'm sorry this prayer is in Latin, this will be over soon, etc. Who needs that.

Then these six Italian guys went and got the statue and nailed it to this kind of stretcher so they could carry it over their heads. So now we've got this statue. And we all form up outside. There is Padre Secondo surrounded by a phalanx of deacons. And the Knights of Columbus with their plumes and swords. Someone is pulling this sort of megaphone-on-wheels through which Padre is blasting a mixture of Italian and Latin. He is from Milan! I have probably mentioned that. There are altar boys carrying a big crucifix. And leading the procession are the flags of the United States and Italy and in front of them is the gold and white flag of the Catholic Church. I should have taken better pictures but I was so fascinated by this spectacle that it did not occur to me to take out my camera until I was in the middle of the procession and I could not get a good angle. But anyway.

Here we are passing the new Federal Courthouse. 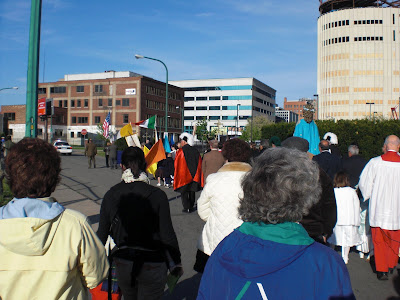 Government was not far from our minds and as we neared the church again, Padre Secondo led prayers for our city and county governments as well as the fire and police departments and the FBI.

One thing, I just wished we were in a neighborhood where more people saw us. As a lone German in this company of Italians my main concern was with military might and I liked the idea of impressing people with this show of strength. On Seventh Street people came out on the porches of the projects and stared at us. I loved that. There is something about Knights of Columbus and their plumes, the statue of the Virgin, and loud Latin prayers that gives the impression of order and safety.

"Gloria Patri, et Filio, et Spiritui Sancto." That would blare out of Father Secondo's megaphone. It means: "Glory be to the Father, the Son and the Holy Spirit."

And then we all respond with gusto: "Sicut erat in principio, et nunc, et semper, et in sæcula sæculorum. Amen." That means: "As it was in the beginning, is now, and ever shall be, world without end. Amen!"

I do not altogether understand how the translation works out, but that is a phrase I love, "World without end." Such power! Such certainty.

What about Web log without end? There is a phrase for a Monday morning.

I remember when the Italian Festival was on Connecticut Street. A full size statue of St. Anthony was carried for many blocks through the neighborhood by 4-6 men using poles that extended from the bottom. They had to keep switching sides to give their arms a rest.

Whoaa! That is pretty amazing!

Thanks "Mary" for your description of this awesome experience inspired I think by Our Lady Mary herself, Madonna Della Libera. I too wish more people knew what they are missing. thank God for St. Anthony and God bless America. Patricia longboat