Close encounters of the idiot kind 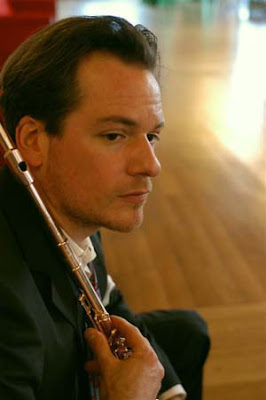 Yesterday when I was offering my timeless insights into Jack Kemp, I promised to tell the story of my idiot meeting with the flutist Emmanuel Pahud. If you are new to classical music all you have to know is that Emmanuel Pahud is one of the greatest flutists in the world.

That is a picture above of Emmanuel Pahud whose path crossed mine late Thursday night, this would have been.

This happened at Jackie Jocko's a couple of nights ago, when I had had two glasses of wine and Jocko chooses that time to call me over.

And I have had these two glasses of wine and I am trying to wave Jocko off.

Then I hear him telling this guy to go over and see me so, OK, I get up. And it is this British guy Jocko is trying to get me to meet. I did not catch him name, and all of a sudden this other guy shows up.

"This is Emmanuel Pahud," my new British buddy said.

And I thought: you're kidding!

With which, I turn and I say exactly that. "You're kidding!!" I said. "You're Emmanuel Pahud?"

It is like my cousin Howard when he was introduced to Graham Nash. My cousin Howard had had a couple of drinks and all he could say was: "Graham! Graham!"

Nash, he said later, "was not impressed." I may have told that story before because it is famous in my family.

Here is a video of Emanuel Pahud playing Mozart with the Berlin Philharmonic.

Here is a picture of Emmanuel Pahud with a fan who had better things to say to him than, "You're kidding, you're Emmanuel Pahud?" 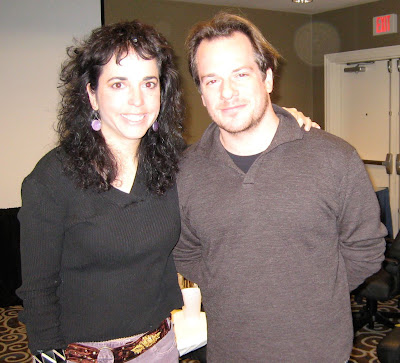 That fan is not me!

Don't you hate it when great musicians jump at you from out of the blue after you have had two glasses of wine? I hate when that happens. Also this other guy Jocko threw at me as "this British guy" wound up being the distinguished harpsichordist Trevor Pinnock and I had nothing sensible to say to him either. My life Thursday night got worse and worse.

The Hyatt in downtown Buffalo is terribly unpredictable. Musicians who have turned up there include Leonard Pennario, Mark Murphy and Dave Matthews. You have to be ready! Which, the other night, I was not. 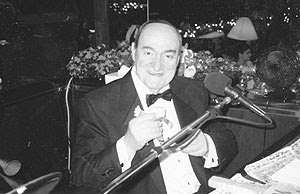 ...asked Emmanuel Pahud how he pronounced his last name and before the flutist could answer, I said, "Pah-hood."

And Mr. Pahud looked at me and smiled this charming Gallic smile and said: "Well, yes, you can say it that way if you want to, but in French it is Pie-yood."

What is with me and my big mouth?

You need to get them to start carrying your Tisdale low-alcohol wine. I'm sure if you explain the situation, they'll be more than happy to accommodate.

On a related, but completely unrelated note, I enjoy playing bingo. Not in Canada or the Seneca places, only at local churches and legion halls. Half of the fun is the cultural experience, especially since I never win.

In any case, this morning I was checking to see who had bingo on Tuesday, when I saw that Jackie Jocko is the bingoplanner.com featured bingo player. I've never seen him playing the piano, but I may have unknowingly seen him playing bingo.

Social stumble:
When Dick Cavett was a Yale undergraduate, he attended a party where he was introduced to the university president. Somewhat lubricated by booze, the young Cavett shook his hand and said "Nice to meet you. I voted for you."
We all do it. I've done it sober, as you know...

After having a good laugh, I reaffirm my decision to stick with the Welches Grape Juice. Having been a hippie in the 60s, I have had more than my share anyway.

You really crack me up the way you tell these wonderful stories! :)

Mary do you always get that silly from a couple of glasses of wine? Kind of explains why you voted for McCain and married Howie. Just teasing! You know we all love reading about your nights out.

Ryan, that has occurred to me, to bring along my Tisdale! I think I have lost my tolerance for regular-alcohol wine. I was thinking about that.. I really did have only 2 glasses!

Larry C and Anonymous, thank you for the sympathy!

Prof. G, as always, so kind of you. I love the Dick Cavett story! That "I've done it sober" cracks me up.

Now I am going to go check out that Jocko bingo link!

Ohhh... I would simply die if I had the opportunity to see him! *o*
I would collapse and go to heaven right away! Oh my God!!! It's my dream to meet Emmanuel Pahud and have a flute lesson with him. I would pay EVERYTHING! I would KILL for this chance!!! ^^

Marthunka, stick with me, kid!