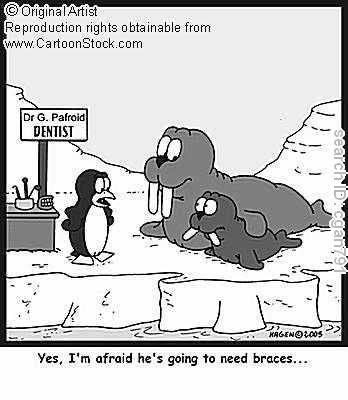 Just now I smiled -- and I got a funny feeling. Something was weird. At first I could not figure out what it was. Then I figured it out.

It was my upper teeth touching my lower teeth!

I do not know if I have ever felt that in my life! I am sitting here right now touching my upper teeth to my lower teeth and marveling at it. But I do not know if I like the feeling or not. It is just so weird.

I have not written about my braces in a long time. Not because I wanted to spare anyone anything. They have just not been on my mind.

They are on my mind so little that I actually missed my last appointment. It was supposed to have been two weeks ago. So, I hope this is supposed to be happening, that my teeth are supposed to be lined up like this. It is a funny feeling.

Speaking of funny here is another cartoon about braces. 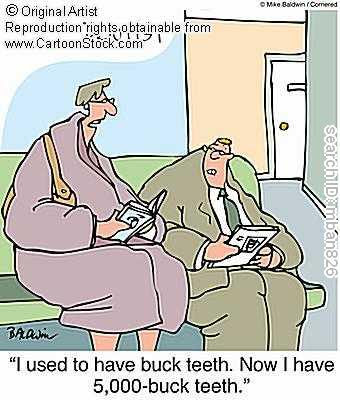 Har de har har!! But I have to stop laughing. I do not think if I have written this but with these braces, I can not talk and laugh at the same time.

This is also funny but it is a secret. I would not have these braces were it not for this opera diva who came to visit Leonard Pennario when I was out in California with him. But that is a whole other story and I am afraid it has to wait for the book.

Remember when my braces got me detained at the border?

How about the time I was on one of my trips to California to see Pennario and the inflight video began showing pictures of braces and blasting: "Ugly! Ugly! Ugly!"?

I remember when my braces were new and I was stumbling over them while I was trying to read my book to Leonard. It was upsetting me but he kept telling me I was doing fine. What a darling man he was. He was so nice to me.

Now my braces are finally paying off.

This latest progress thrills me. Since I was a kid I had always had what is called an overbite. That is what my friend Herb when I was in my 20s said. Herb was a great friend and very cute and always told you the truth. And I remember he said to me once, "I like a girl with an overbite."

And I said, "Herb, I have an overbite?" I had never thought of it.

Herb, wherever you are now, you are great!

Later when I worked at the Niagara Gazette a bunch of us got into the habit of going to Founding Fathers on Friday nights. OK, we went every night of the week. But anyway. There was one guy who I guess was there too who later told a friend of mine he remembered me.

He said, "She has huge teeth."

I did not know what to think when I heard that! But I got the general impression that he meant it in a nice way, so, no offense taken.

Furthermore, he was right. The ortho told me I had big teeth. His teen-age daughter had the same problem and she was having the same procedure I was, which was to have four teeth yanked, I mean pulled, and then the rest of the teeth would close in. I guess it is a kind of classic case.

I like what my friend Judge Barbara Howe, if I may indulge in a little bit o'name dropping, told me about the situation. She goes to the same gym I go to, and that Leonard Pennario went to. Quiz: What gym did Leonard Pennario go to when he was in Buffalo? Correct! The Buffalo Athletic Club!

Judge Barbara Howe told me: "Times have changed! We don't have to be content any more with what God gave us!"

That is the truth! I am sitting here right now smiling about it.