10 things on the screen this summer 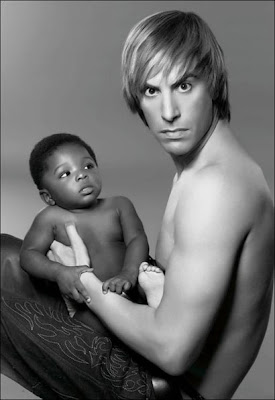 Today in the Wall Street Journal I see "10 Blockbuster Hopefuls." It is an announcement of the summer movie season.

Zounds and zut alors and criminy!

It is not that I cannot stand idiot movies. Things like "Anaconda," "Final Impact," "Gladiator," I loved them. Leonard Pennario loved "Gladiator" too. Both of us, in one of those weird coincidences, went to see it twice. We admired each other for that.

But the movies this summer!

The Wall Street Journal lists 10 of them. And all of them violate my convictions that determine whether or not I see movies. Such as:

1.) No movies hyped by pictures of men with guns. So much for "Public Enemies" and "Taking of Pelham 1 2 3." Well, these movies were dead in the water anyway. Because I also have rules against movies about bank robbers and movies with stupid titles.

2.) No movies I have to have seen other movies to understand. This eliminates "Terminator Salvation," "Night at the Museum: Battle of the Smithsonian" and "Transformers: Revenge of the Fallen." And "Harry Potter and the Half-Blood Prince."

3.) No cartoons. I know, I would probably end up liking them, blah blah blah. But still. Cartoons for this summer are "Up" and "Ice Age: Age of the Dinosaurs." Which, I saw one of the earlier "Ice Age" movies. It was dumb.

4.) No movies starring Adam Sandler. His face makes me physically ill. That takes care of the one "romantic comedy," called "Funny People."

Well, romantic comedies are all vulgar anyway. Sorry, but I prefer this ... 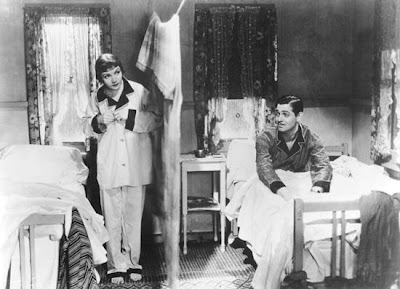 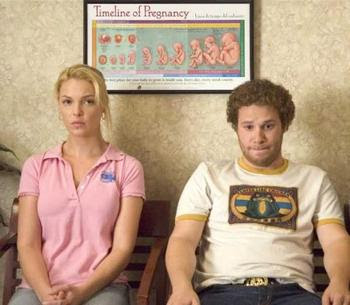 Where is the escapist fare that I require now that the government is taking over all our banks and businesses and we are losing our freedoms one by one?

Well, wait. There is one movie that sounds kind of funny. That is "Bruno," by the guy who did "Borat." That is Bruno up at the top of this post. He is some kind of deranged fashion model as I understand it. That look on the little kid's face! Ha, ha!

Howard and I went to see "Borat" with our friend Myron. That was one thing that made it funny, Myron's laugh. "Nyeeeehh, heeee, heeeee!" Myron laughed, all through the movie. All you need is one person like that to get everyone in the theater laughing.

Here is a picture of Myron in conversation with Howard's cousin Ron Moss, a couple of years ago when Moss was running for mayor. He is not laughing there! But then Moss' campaign was serious business. 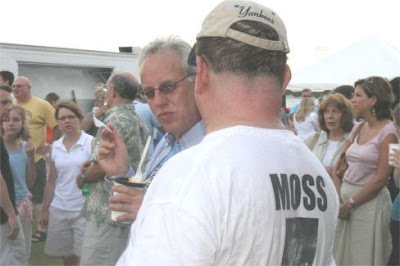 Partly as a result of Myron's laugh, there are parts of "Borat" that still crack me up. The part where Borat was at the garage sale and thought all the items spread out over the grass were treasures the woman had plundered. "I will look on your treasures. I will look on them." That killed me.

And the part where he sang the national anthem including the line about all the other countries looking like little girls. I have caught myself using that line vis-a-vis my book. As in, Pennario's playing of the Liszt Sonata makes all other pianists look like little girls.

You know how books list under "Acknowledgments" all the people who inspired and helped them?

Mine will be the first classical music biography to credit Borat.
Posted by Mary Kunz Goldman on April 24, 2009

Go rent Toy Story and then Toy Story 2. Great stuff. And WALL-E might have been the best movie I saw last year. You can thank me later.

Leonard's version of that Liszt Sonata is simply extraordiary! It is amazing how he plays it. Just fantastic!

Yesterday, soon after uploading it to YouTube, I received a PM from a LP fan who expressed his great admiration for Pennario and he had a question for me about the recording. I thought I might have to call Mary at first but it worked out OK. It seems that I too am quite a fan of the great Leonard Pennario!

LarryC, you know you can call me any time. The Pennario hot line is always in service! I love that you posted the Liszt sonata. It's a fascinating piece and it has been fun corresponding with you about it.

Budd, I'll rent Toy Story as soon as I get the book done! Thanks for the recommendation!