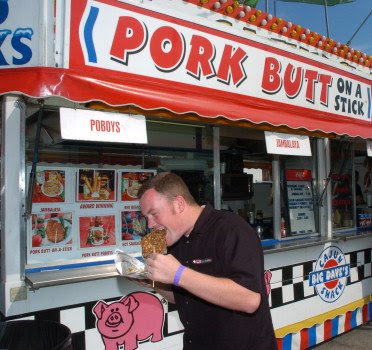 You would not believe what I loaded into the crockpot just now.

Yes, I got a big ol' butt, as the song used to go. Remember that song? I sure would not mention that song to Leonard Pennario, I will say that. But I can mention it here, in this particular context. I have slathered that big ol' butt with a mixture of soy sauce and my own handmade orange marmalade and it will be good! Don't hate me. I just want to give everyone a community feel here.

Speaking of community feel, here is the beauty of Facebook. Sometime over the weekend, slaving away at my book, I slapped a comment up there. It was really dopey. It said: "Mary Kunz Goldman is trying to figure out what is the greater achievement, finishing a chapter of my book, or killing a large horsefly."

Which was the truth! I had just killed this fly and I found myself feeling fly about that. I am using slang right, am I not, fly? Doesn't that mean hip, something like that?

Anyway. The next day I looked and to my astonishment, all these comments had followed my dopey remark. Here they are:

Mark Heimback-Nielsen at 10:27pm March 15 via Facebook Mobile
Please let it be finishing the chapter over killing one of God's creatures (even if it is scary and has wings) :)

Michael Powers at 10:46pm March 15
Think of them as short term and long term accomplishments, means to an end

Cherie Messore at 12:44am March 16
Did the kill occur in mid-flight or had it landed?

Mike Riley at 4:33am March 16
How about killing a large horsefly with a chapter of your book?

Garaud MacTaggart at 6:00am March 16
Writing a chapter takes longer. Go for that one.

Dave Lundy at 9:04am March 16
How would Leonard Pennario have killed a horsefly?

Cherie Messore at 11:56am March 16
Syncopated with his left hand and melodically with his right?

Bonnie L Musella Bowen at 7:22pm March 16
I use the vacuum cleaner. This exchange made me giggle.

The thing is, these people don't know each other. Dave Lundy, with the crack about how Leonard Pennario would have killed a horsefly, is an actor who is engaged to a friend of mine. Mark Heimback-Nielsen, as I mentioned the other day, is the expert on Capitol Records in California I met because of his blog. He was from California but he wound up being from Eggertsville.

Michael Powers works for the zoo. Carl Herko I used to work with years ago. We once co-authored a story about bathrooms in Western New York. Now he is in charge of public relations for the Oregon Symphony.

Jim Neiss is a photographer and we worked together at the Niagara Gazette. Garaud MacTaggart reviews classical music for The Buffalo News, and we run into each other walking in the park. Art Page is the head of the publications department at UB.

Daryle Pompeo was one of my roommates in college when I lived in that squalid haunted apartment on Parkside and belonged to the medieval society. He lives in Florida now.

And here they all are, weighing in on my chapter and my horsefly! The world revolves around me! Me, and Leonard Pennario!

I am telling you, life is beautiful sometimes.
Posted by Mary Kunz Goldman on March 18, 2009

I see I am missing some good stuff on face Book also. I haven't been on there much at all in the last 2 weeks either. I better get back to it and try and stay current. I missed some of those good comments on there.