We Faked Out that Fiery Furnace 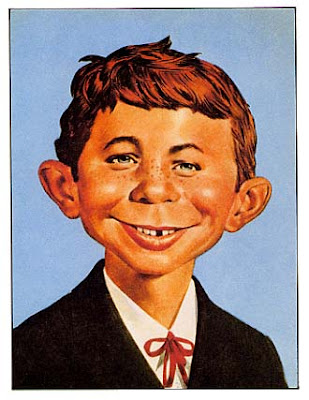 This morning I began thinking of Mad magazine. I am not sure what brought that on! But I have read that Mad is knocking back their publication. The magazine is going to come out fewer times every year, something like that.

I feel bad about that. Mad magazine was part of my childhood. Why am I revisiting my childhood so much these days? Yesterday it was "Lost in Space" and today it is Mad magazine.

I have a theory as to why Mad is not doing so well. And I know what I am talking about because (gulp) I had a subscription as recently as, um, two years ago, or something like that. Do not tell anyone! The reason I had the subscription was my brother George would give it to me for my birthday. Finally it lapsed but I felt awkward asking him about it because I thought, probably I owe him a birthday present or something and I should not bring this up.

In my recent experience Mad still had its moments. There are those great cartoons by Sergio Aragones. 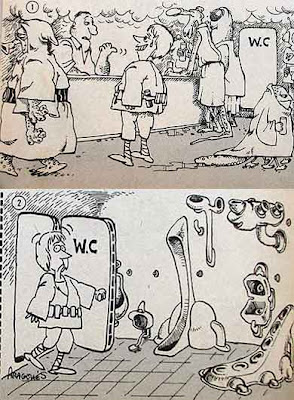 And those frozen-in-the-'70s cartoons by Dave Berg. 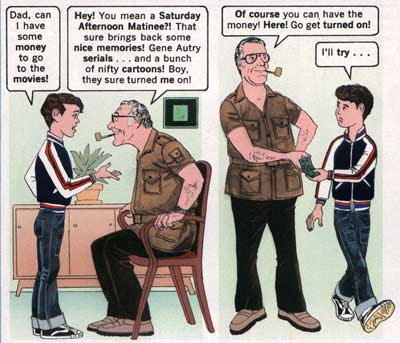 What about Alban Berg? 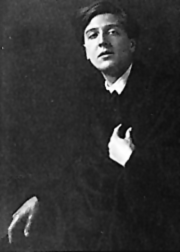 I played his Piano Sonata once in a recital for the Friends of Vienna. That is a piece that I love!

Back to Mad magazine. This is probably the first time in history anyone has gone from Alban Berg to Mad magazine! The magazine was getting trashier and stupider in recent years but the worst thing was, I couldn't blame them. What jokes are you going to crack to kids nowadays? That is what I started thinking.

That cartoon by Sergio Aragones, it takes work to understand it. You have to sit and look at it and think about it. Who has that kind of attention span any more?

When I was a kid Mad did a spoof on fan magazines called Bible Babble .. it had stuff like "Seven New Psalms You Could Groove On Your Lyre," "The 103,495 Night Methusaleh Would Rather Forget" and an interview with Shadrach, Meshach, and Abednego, called "We Faked Out That Fiery Furnace!"

They also spoofed Edgar Allan Poe's "The Bells," making it about the phone. "See the housewife on the phone/Kitchen Phone!/Talking to her neighbor in a boring monotone..." My dad thought that spoof was so clever that he xeroxed it and took it into school and passed it out to the kids when he taught "The Bells."

Does anyone these days know about the Bible and "The Bells"? I am not saying you cannot live some kind of life without knowing that stuff but it makes the joke pool much narrower if people do not, is what I am saying.

Thinking about Mad makes me think of the centuries passing. Ranging around on the 'Net just now I was looking at pictures of Dave Berg and Sergio Aragones. They must be Leonard Pennario's age! When we were kids we were snickering about stuff by guys born in the 1910s and 1920s.

That is something to think about.
Posted by Mary Kunz Goldman on February 12, 2009

All this--before we ever learned the true meaning of, "It's crackers to slip a rozzer the dropsy in snide."

Follow up comment: A link provided to the Berg sonata played by ...GLENN GOULD???? After all the stones you've thrown at him? This truly is the world's most unpredictable blog.