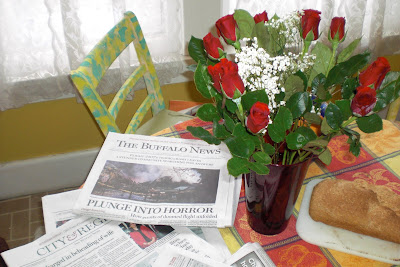 Yesterday to my astonishment Howard sent me roses. This is very abnormal! It is so abnormal that, and I am not kidding here, when he was telling me the UPS guy was going to show up and I should answer the door blah blah blah, it went in one ear and out the other. I did think it was odd that Howard was receiving a package here instead of at his business address, but so what, maybe it was something he needed right now.

Then Howard goes to run some errand and eventually the doorbell rings. And I thought: Darn, here is the UPS man, and here I am, still in Leonard Pennario's bathrobe. That had not crossed my mind, that I should get dressed! But I go to the door anyway.

I open it up and there is this box sitting there. This big, long box. I bring it in, set it on the floor and go back to doing what I was doing, which was listening to Pennario's Chopin scherzos and thinking of all the ways in which they were better than anyone else's.

Then Howard comes home and he says, you didn't open the box?

Here is a picture of the box once I had figured out what it was. 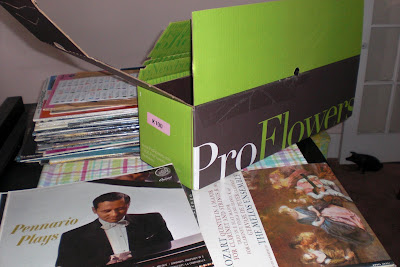 Ha, ha! Look at it precariously balanced on the piano. It will probably stay there for months! At our house things quickly become invisible.

And now a picture of the meticulous way in which the roses were packaged. 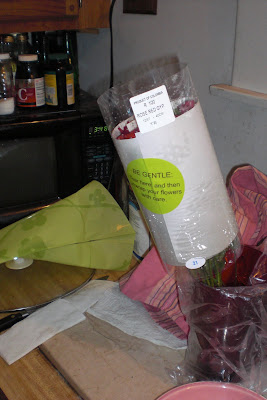 Here is Howard being a capitalist. 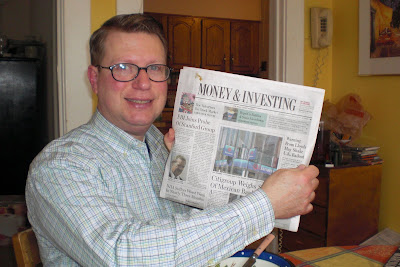 Editor's note: I am wearing Leonard Pennario's shirt.
Rush would be happy to see how our roses turned out. 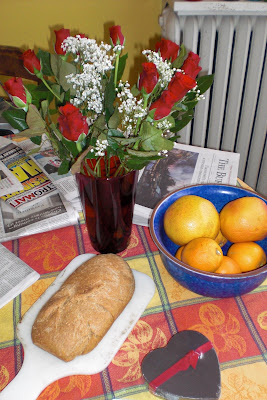 That is another picture of the roses at the top of this post! Observe the yellow chair painted by the great chanteuse Mary Kate O'Connell. I bought it at the Diva by Diva Sale so I assume she painted it, anyway. It is very valuable!

Hmmm. I wonder if that is the great British accompanist Gerald Moore in that link. It looks like him and you have to figure that Joan Sutherland would have someone really quality.

Also observe the headlines in The Buffalo News. Can you believe it, that business about the guy accused of beheading his wife? He is lucky that happened with the plane crash going on. No one is paying any attention.

Note to out-of-towners: Buffalo is one tough town.

We are not like other cities!
Posted by Mary Kunz Goldman on February 15, 2009

Looks like you had a very Happy Valentine's Day, or better said, The Feast of St. Valentine. Great looking roses, and quite nice of your husband to get them for you!