The Grammys check in 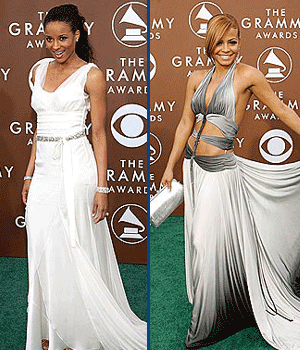 The Grammys called me again yesterday. They will not leave me alone! I was eating lunch in the cafeteria when they called. I was eating with my friends Melinda and Toni. Melinda and I were arguing over which of us had the weirder leftovers.

I personally think I won that contest! I had this pasta sauce I had made with tomatoes, eggplant and chickpeas, only I had no pasta, and then I had half a Polish sausage, one of those sausages from the Broadway Market. And it was all thrown together haphazardly because I had to run out the door abruptly because Howard had to have me drive so we could give a potential police department customer a demonstration of our covert GPS vehicle tracking system.

Howard is in the law enforcement technology business and his big product is this covert GPS vehicle tracking system that you magnet to the bottom of someone's car and you can see where the rat is all the time. I am the tester. Besides being the authorized biographer of America's greatest concert pianist I am the most observed woman in Buffalo. Everywhere I go I am being observed by law enforcement and private eyes across the country.

What about private dicks? They observe me too. I want to start using the word "dick" in that context more often. The dictionary says it is short for detective.

Where was I? How in the world did I get where I am?

Oh, I was talking about my lunch which was an unholy mess because of Howard making me leave the house in such a hurry. That was what I was eating when the Grammys called. It was Grammy Pam who called. I stepped away from the table and went into a corner of the cafeteria to talk to her. I wonder what Grammy Pam looks like! I imagine her looking like one of those Grammy ladies pictured above.

Pam was calling about the release form I have to sign and return to them. In it I attest that I own the rights to the picture of Leonard Pennario they are going to display during the course of this year's ceremony. That is the picture that way back in California I called "LP in the Woodshed." The one where he is sitting at a Steinway and dreamily penciling a score.

Pam told me again: "That is such a wonderful picture and the producers think so, too!"

Then she exclaimed: "Your book is going to be SO COOL!"

That made me so happy! I was standing there beaming. I love how the people at the Grammys are passionate about what they are doing.

I also love that just seeing a picture of Pennario could affect her so much. Which, I do not blame her. On whose arm would you rather arrive at the Grammys, one of the Foo Fighters' ... 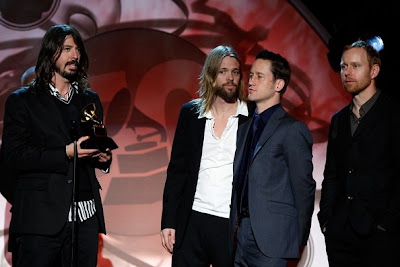 Wait till Pam hears Pennario play! Then she will really be hooked.
Posted by Mary Kunz Goldman on February 05, 2009

I'm trying to figure out what five minutes of the Grammy show to watch for the Pennario clip--without having to sit through the Jonas Brothers or Beyonce or whatever other high school dropout squawked her way to a platinum album this month. Guess that's why the Lord gave us the DVR.