Talking to the dead 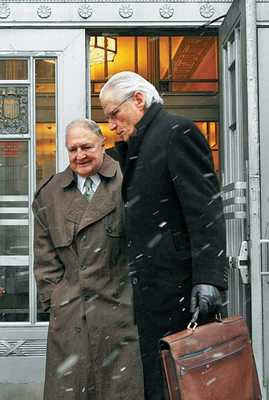 I have been preoccupied recently because the God Squad said that we are not supposed to talk to dead people. You know the God Squad? They are in the paper on Saturdays. The column is written by a priest and a monsignor. Or it was, before the monsignor got sick. Now the rabbi writes the column by himself.

The monsignor has Parkinson's Disease, I believe. That is what Leonard Pennario had.

The monsignor, whose name is Thomas Hartman, also looked like Howard. My friend Paula at work pointed that out and she was right. Because look, here is a picture of the monsignor (on the right):

And here is Howard (on the left): 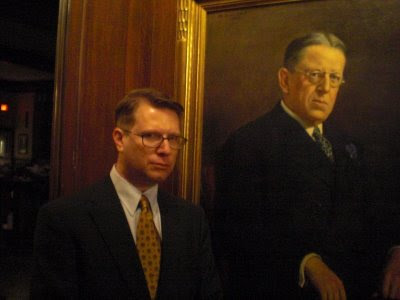 That is the famous picture I took at the Buffalo Club. We are going there again tonight! That is a whole other story.

Back to the God Squad. So now the rabbi is writing this column by himself, and last week, he told a Catholic person that it is not OK to talk to the dead. He said that Scripture had forbidden it, and he quotes the chapter and verse, blah blah blah.

While I am reading this I am thinking: Wait!

I knew you couldn't go to mediums. Since I started Latin-massing it and became a more traditional Catholic that has finally dawned on me. And I have to say I am glad for an excuse not to go to mediums when my friends try to get me to. I have enough expenses. That is for sure.

But talking to the dead, ourselves, casually, on our own? If we are not allowed to do that the Catholic church would probably screech to a halt. Well, the people in it would. My mother is more Catholic than the pope. She makes the pope look liberal. And I have never heard her forbid that.

Instead I hear: "Ask your father what to do about that!" My father died 12 years ago.

What I am getting at is, sure, I have never read in the Bible that you are supposed to talk to dead people, but at an early age you get used to their presence in your lives. You are supposed to think of them and pray for their souls and light candles for them and have Masses said for them. And you get into the habit of thinking they are there monitoring your doings and you can address them now and then if you so choose. It is not as if you expect them to talk back. But you are allowed to throw it out there. Sometimes it just makes you feel better.

Occasionally if I am working on the book and no one is around I might say out loud something like: "Leonard, I do not understand this one thing. What did this mean?"

But now I wonder if it is allowed. Imagine what it would be like if I died and found out it was not. All my better efforts would be for naught, because, oops:

"You talked to dead people."

"We have on record that on January 16, 2009, you had a glass of wine and came home and worked on this book you were writing and you asked Leonard Pennario what something meant."

What about Peter Piccolo? We have not talked about him in a while.

Where was I? On Saturdays I get too relaxed and I get off track. Joel Daniels. I would not mind having him with me on Judgment Day, I will say that. I happen to know, too, that he loves Wagner operas, as I do. So he would understand me and defend me well.

I also would not mind if the God Squad found someone else to represent the Catholic Church in place of Monsignor Hartman, for whom, by the way, I will be saying my prayers. There might be something in the Old Testament about not talking to the dead but that does not mean that something in the New Testament did not cancel it out. That happens sometimes in the Bible.

It would be good to find out what is what.
Posted by Mary Kunz Goldman on January 17, 2009

The James Joyce story "The Dead" is a powerful statement about the effect dead loved ones have on the living. I like the idea (which I think is African), that says death occurs in stages. The first stage is the decease of the individual himself (or herself), but death is not complete until no one is left who remembers him (or her), or until their influence is entirely gone. That means Mozart, Beethoven, Joyce and many others have achieved a positive form of eternal life. Let's forget about history's villians, who are partly immortal for negative, terrible reasons.

Anonymous, in case you are still out there, this is a beautiful comment and I wish I had seen it earlier. I remember I used to chicken out sometimes from reading comments. Anyway a belated thank you!