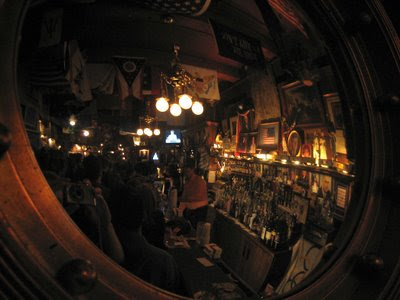 The reason I forgot to photograph Founding Fathers on my own was that as soon as I walked in a raucous gentleman called to me from the bar. The place was crowded and dark and at first I couldn't make out who it was calling my name. Then I peered right at him and I still didn't know who it was!

Then he came into focus: He was my Pilates teacher! You do not think of running into your Pilates teacher in a bar. But here he was! Not only that but he clearly was on very familiar terms with the bartender and the waitress. Well, I knew the waitress too. She has the greatest name, Gil. You say it French style. Gilbert is her full name. Her parents named her for Sabres star Gilbert Perreault. Note to out-of-town Leonard Pennario fans: In Buffalo we name our kids after our hockey players. That is perfectly normal.

"Gilbert!" my Pilates teacher kept shouting. And he would order drinks for people. He immediately forced me to drink a shot of Jack Daniels, which, you know me, it is extremely difficult to get me to drink anything. But he did it!

My Pilates teacher's name is Jim. Jim, gym. That is how you remember it. He reassured me as I sipped the Jack that Joseph Pilates enjoyed a good cigar and a good drink. One thing I like about my Pilates teacher is that our classes are full of references to things Joseph Pilates approved of and what he would have wanted.

Leonard Pennario liked a good drink but he did not like cigars. It is funny how great men differ from each other.

Here is a picture of Joseph Pilates. 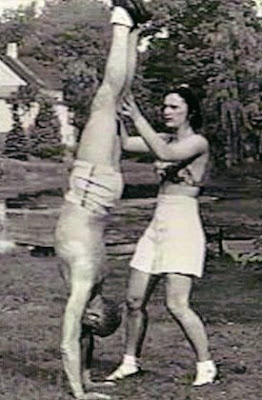 That is Joseph Pilates' niece with him in that picture. It is a little like when I have stayed after class and Jim and I have helped each other with our stretches. I will tell you this: I have always liked my Pilates teacher a great deal but after lastnight I see him in a whole new light. He was like Mr. Founding Fathers! He knew everyone! When Jane ordered the famous Independence Burger we moved from the bar to a table and he followed us there. When he announced he was going to go bug the people at a different table, Gilbert, the waitress, approached discreetly.

"Is that gentleman bothering you?" she whispered.

What with all this excitement I did not think to take a picture of Founding Fathers. And I wish I had because it is a beautiful bar in an old livery stable that was built when Beethoven was alive. So I cribbed the picture at the top of this post from Julian Montague's blog. Montague is a writer and photographer who lives in Buffalo. I don't know him, but, now I do! Here is another picture of Founding Fathers from Julian Montague's blog. 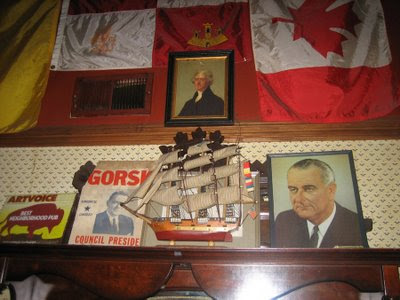 The picture of former county executive Dennis Gorski reminds me of the famous photo of Howard's cousin Ron Moss, back when Moss was running for mayor. Here is the picture. It is of Moss greeting a supporter. 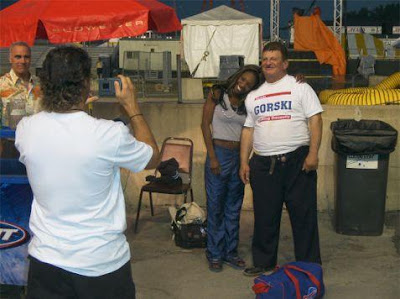 Here in Buffalo we all write books and interestingly, Montague's book is called "Stray Shopping Carts: A Field Identification Guide." We are sure at least one of those carts is in there courtesy of Howard's cousin Ron Moss!

Oh no, here I am listening to Beethoven's Ninth!

Am I ever going to get any work done?
Posted by Mary Kunz Goldman on January 31, 2009