Sweat and tears and Britney Spears 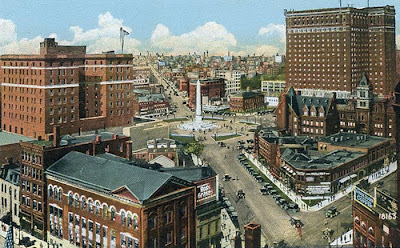 Yesterday even though it was the last, last, LAST thing I wanted to do after a day at the office I went to the gym. There is a trick to making yourself do this. I read this somewhere and it works. No. 1 you have to put your gym clothes with you, at work or in your car, as the case may be. No. 2 even if you do not think you will go to the gym, you must head in that direction.

All the way you may keep telling yourself: You can turn around and go the other way. You can go home if you want to! That is what I used to tell myself when I was on bad dates and that is how I treat going to the gym.

But in the case of my gym, which is the Buffalo Athletic Club, you make the fateful turn into the parking ramp and then it is the point of no return. When I did that yesterday, I could not believe I did it. Even when I was on the treadmill I was still thinking, I can't believe I found the mental and spiritual wherewithal to be where I am!

Gyms would not be such a challenge if it weren't for the stuff they blast at you. Sure enough, yesterday I got hit with Britney Spears' "Womanizer," right away, first thing. Why can't the world work out to Chopin's "Heroique" Polonaise, played by Leonard Pennario? If they played that I would not find it so onerous to go.

I also would like it better if I had something decent to read. Yesterday all I had was this New Yorker magazine and it was full of depressing Third World stuff. Even their short stories are always set in some foreign country and disgusting things are always happening in them. My book on Pennario will be a breath of fresh air in today's literary world, I will say that. It is about time someone wrote the kind of book I would like to read.

Pennario used to work out at the Buffalo Athletic Club. That is something positive to think about. He belonged to the New York Athletic Club and they honored his membership at the BAC whenever he was in Buffalo. That is the Buffalo Athletic Club on the left in the picture above. Note to out-of-towners: This is the kind of building Buffalonians take for granted as we go about our mundane lives. Even our gyms are designed by E.B. Green and are hundreds of years old. That is the Statler Hotel on the right. Big Blue is behind the Statler.

Where was I? Me at the gym. Here is the punch line. I sweat through an hour at the gym. Forty minutes on the treadmill, the rest in the weight room, where I am pumping iron along with massive tattooed guys who, as Howard told me, are trying to stay in the good shape they were in when they were in prison.

And then what happens? I go to get dressed again and my skirt is tighter on me than it was before.

For the love of God!! That is what my friend Michelle W. says in moments of great stress and so I say it now.

Is there no justice in the world? I cannot eat cookies with my braces so it was not the cookies.

Was it the pumpkin pie? I did eat a little bit after I got back from sledding. I had run up that sledding hill dozens of times but still.

At least I am not alone. My brother George just showed up and we are going to go walk in the rain. "I am really under-exercised," he said. "I have to go do this."

We are the desperate!
Posted by Mary Kunz Goldman on December 27, 2008

Ah.. don't worry. Your muscles probably are swollen from being worked out, thus the tighter skirt. I'm not making this up!

Next time, try working out to Wall of Voodoo's "Shouldn't Have Given Him a Gun for Christmas."