Awash in a sea of flour and butter 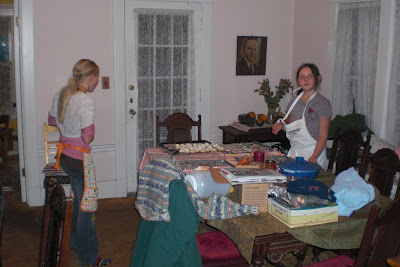 Here are my two beautiful nieces, Rosie and Millie, posing with the cookies we made lastnight. That is Calvin Coolidge looking down from the wall, no doubt wishing he could have a date bar or two. Every time someone new comes into my house and sees that picture the person always says, "Who is that, your dad?"
"No," I say.
"Who is it?"
"Calvin Coolidge."
Then the conversation proceeds and you can tell the other person never gets over being puzzled. That is the fun of having a picture of Calvin Coolidge in your dining room. We are a Calvin Coolidge family. We like "Silent Cal." There is no one silent in our family! That is for sure.
Rosie and Millie are my sister Katie's kids and lastnight we all had a riot. Honest, I awoke this morning thinking, wow, that was fun! Why don't I make cookies more often? Here we are thoughtfully perusing the Cooky Cookbook given to me at Thanksgiving by my sister Margie. 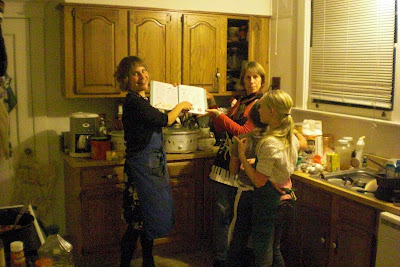 One thing, though. Katie admitted she was reading my blog. Wow, nightmare! I mean, look at all the stuff I write about her secure in the knowledge that she never reads my blog.
She got mad about one thing and she was right so I have to correct it. She did not like that I made it sound as if she did not care about Leonard Pennario other than the fact that he was in "Dear Abby" along with Horowitz and Rubinstein. That was in my recent ground-breaking post about "Dear Abby."
"I do care about that Pennario played with Jascha Heifetz," she said lastnight, and this is direct quote I am happy to say. "I care that he learned and memorized the Grieg Piano Concerto in one week when he was 12 and performed it for 2,000 people." Well, maybe that second one is not a direct quote but you get the idea.
Now, that is the kind of thing I like to hear! She told me that and I melted into a puddle. Specifically, into a puddle of gingerbread frosting someone had spilled on the floor. That is something I will have to deal with today.
"Don't make it sound as if all I think about is 'Dear Abby,'" Katie said. So, my apologies. I type this stuff typically over my first cup of coffee when my eyes are not quite open, hence the raw honesty. This is not my first screw-up. Once I wrote Burger Mo's when the name of the place I went to was Homo Burger, or something like that. Remember when I did that? And that schuft got mad at me in the comments?
Lastnight we made cutout sugar cookies, date bars, Joe Froggers, chocolate crinkles, gingerbread men and women and Russian tea cakes. We made the Joe Froggers just because of the name and because we needed a spice cookie along the lines of Pfeffernuesse, which we always made as kids. We could not believe our output. It looked like Vin-Chet's bakery. Here is Rosie posing with our handiwork. 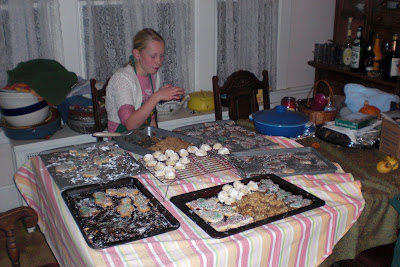 Howard fell in love with the date bars. He said, "I mourn every date bar that leaves this house." So there is a tray of them still here for him.
Another thing, Howard took a picture of the back breakfast table just slathered in flour and butter. Flour was everywhere and in the middle was this bottle of Pinot Grigio just covered in dough and flour. We had needed an extra rolling pin so I had given Millie the bottle of wine to use. My friend Gary uses a wine bottle for a rolling pin so that is where I got that idea. It is an Italian thing. Anyway, late lastnight when I was cleaning up I was thinking: I cannot believe I am washing a bottle of wine.

I think that picture is in his camera because I can't find it. I will have to post it later.

It has to be seen to be believed. 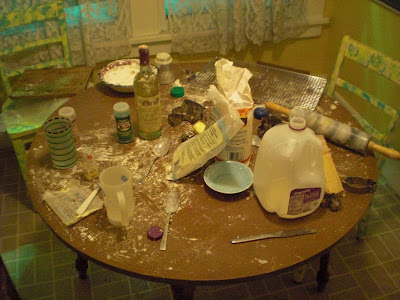 Thank you for sharing with us the fun you had last night. Your blog puts an extra shine to my day. Hugs in ID