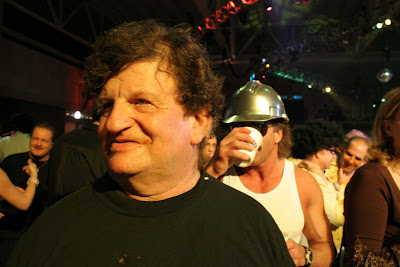 Party animal protrayed by performance artist Ron Moss.
(BuffaloBloviator file photo.)
Didn't I just write that I was the only person who could sit on a bar stool one minute and go to a Tridentine Mass the next? I was not kidding!!!

Yesterday, mere hours after emerging from my Latin Mass -- I am here in California, remember, working on the biography of Leonard Pennario -- I wound up drinking beer at the gayest bar in the entire world. I mean, this bar is the capitol of Gay America.

I was brought there by Mike, one of Leonard's friends. Mike is openly gay and also Buddhist, which Leonard and I have been known to -- shhhh -- giggle about now and then, affectionately of course. Mike is Leonard's equivalent of my friend Larry Solomon. I am going to make plans with Leonard to fix Mike and Larry up. Anyway, Mike thought he and I needed a break so he had promised me this lunch out, which was very nice of him. And I love Mike. He has been extremely nice in helping me out getting my bearings in San Diego while I am writing this book.

But this place! It was like no place I had ever been in my life!

It was called Homo Burger, something like that. Wait. I have it. Burger Mo. Mike explained to me helpfully that "Mo" is short for "Homo." I am not sure why he feels he has to explain gay culture to me as if I have never seen it before. But back to this bar. It was half indoors, half outdoors, and it was packed, with everyone shoulder to shoulder sweating and holding shots and bottles of beer. It was like the Allentown Art Festival on a 90-degree day. Except at Allentown, only about half the people there are large and homosexual with tattoos. Here, all the people were!

There was this guy at the next table. I have to talk about this. A huge, hairy guy with a kind of Mohawk but a long ponytail down the back. He had a ton of tattoos. And every time he got up to get another beer, which he did about every minute and a half, his pants would go halfway down his kiester. I mean AT LEAST halfway down. This was not your garden-variety "plumber's ass." I am sorry to use that word -- I was trying to avoid it by using the Kaisertown "kiester" -- but it would ruin the story not to. Every two minutes I was faced with this huge, hairy ass.

On top of all that the sound system was pounding. POUNDING. Mike looked around at the scene, drinking it in, eyes shining. He laughed, "Leonard would HATE this place!"

And I'm thinking: Yeah, no kidding!

But what about me? I am surprised that when I walked in the door an alarm did not sound. (Well, one probably did. They just couldn't hear it over the beat.) I had on a flowered yellow skirt and a pink top. And to complete my Lilly Pulitzer look, I was wearing this hilarious Republican headband. It was bright blue and green. I had the headband on because as I just said, I had just come from Mass, and at the Latin Mass people tend to follow old-fashioned rules, one of which is that women wear something on their heads. I would feel like a dork wearing one of those white mantillas, but I had this headband handy so I had worn that. So here I am, squashed in this uproarious gay bar, looking like the biggest square.

I realize I got the bar's name wrong. It is Urban Mo's. I just looked it up. They have a Web site, http://www.urbanmos.com/. Check it out and you can share my experience. Just make sure if you're at work that your computer's sound is turned down.

The good news is the burgers at Urban Mo's were fantastic. So was the beer. A couple of cold ones, and I felt much more at home.

But that sight at the next table was still a little, uh, hairy.
Posted by Mary Kunz Goldman on May 19, 2008

oh mary. i love how you accept people off all persuasions!

Oh no Mary are you becoming a fag-hag?

The one thing i have to say i have to say you have is courage. You wrote almost an entire post without knowing the name of the place you were writing about? Made jokes about the name, used the jokes as filler to flesh out a story, then "realized"(?) you had the wrong name but kept all the old stuff anyways? i wouldn't be able to do that i freak out sooooo much when i get thngs wrang!!1 like that!!! but it's okay! i'll just spell "things wrong" correctly lower down!

p.s. you are wrong ALL of allentown is big fat gay men!!! i went one time for the fest and there was this guy that was exactly like your friend i think it was him/? hha jkjkjkjkjjjjjjjk im realy okay with them

In defense of Buffalo's gay bars, I'll bet that Joey Marcella's place or the old Club Cobalt could hold their own against that San Diego MoTown place.

Club Cobalt used to be located in the old house on Delaware that we are restoring. I found some great vintage posters of "Trailer Trash Tuesdays" and "Fake Ladies Night".

The parking lot guys told me that they used to "pack" the place.

There goes my monopoly on blogs kept by Buffalo News reporters.

And good luck with the book. All of the cool News people write biographies or autobiographies.

I've been there! One of my best friends used to live in the neighborhood . There were no alarms for straight Democratics - in fact she and I met a great guy there who had done the waterfall landscpaing at Neverland ranch who was having a huge fight with his partner and bought us drinks all night.
Buffalo misses you - and we do too!