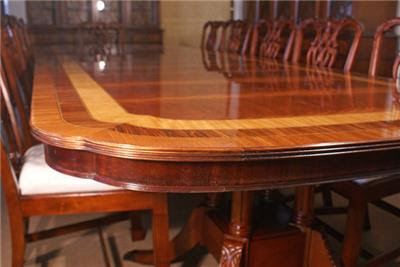 Howard found this table on the Internet. We want it. It is 13 feet long and the only trouble is that it costs $12,000.

Darn! It would have been so great to have for Thanksgiving.

I am preparing to, ahem, play host to the family Thanksgiving. On Tuesday I have to go pick up my turkey at Malczewski's. Remind me, someone! Jim Malczewski wants me there on Tuesday and not Wednesday. If I go there today he will remind me because he knows that the only thing I can focus on is Leonard Pennario.

Wow, have we ever checked out that Pennario performance before? I don't think so. What a stunner! He is out of his mind! He makes all the other pianists sound like little girls. I am going to put that on the back cover of my book.

Thanksgiving is a great meal to cook because the menu is virtually decreed and it is all easy to cook. The turkey is bulky but that is the only problem. Pie crusts can be made in advance and pies are pretty foolproof. You do not need them to rise or come out of a pan clean or anything. If Thanksgiving involved a Bundt cake, I would be in trouble. Why I can learn Chopin's "Winter Wind" etude but not get a cake out of a Bundt pan, I will never know, but that is the way I am.

Oh well. My friend Dawn at work told me something that stuck in my head. "Mary, it's good that you stink at something," she said. "It builds character." That was after an office kickball game last year when I had started running from second base when I should not have, and hence had struck out -- Loser! -- and was complaining about it later as we drank beer at the Rose Garden.

Isn't it funny how you have to capitalize Dumpster? Everyone writes "brussels sprouts" and "french fries" but boy, that Dumpster, it's dignified with a big D.

Yesterday after work I started in on the sun room. That is a disaster area because back when we had that flood, this is where I dumped everything. Now it was time to put it all back where it belonged. At least I got to listen to my new hi-fi while I did it. One of the records it came with was the highlights from my favorite opera, "The Marriage of Figaro," with Elisabeth Schwarzkopf as the Countess and George London as the Count and Erich Kunz as Figaro. Remember Erich Kunz? We talked about him a few days ago.

To take everyone's mind off my clutter, here is an aria I love from "Figaro." It is supposed to be seductive -- Susannah is singing it to lure the Count to the garden -- and Mozart could make music seductive as no one else could, if you ask me. That part about "I will wreath your brow with roses." The music there. To die for, if you excuse me for using a slug phrase.

Great, I just sat and watched that video through three times.

First Pennario's Liszt and now this!

My Saturday is really off to a running start.
Posted by Mary Kunz Goldman on November 22, 2008

Is "to die for" a slug phrase or a schuft phrase?
The music posts are wonderful and I couldn't imagine a pianist making a tired old piece like the 2nd Hungarian Rhapsody sound fresh, but Mr. Pennario does.
Now for a challenge: can this constant reader persuade you to post a link to Ives' "Thanksgiving" (from the Holidays Symphony) on Thanksgiving day? It's fascinating how the Ivesian ruggedness dissolves in the middle of that piece to use an old hymn called The Shining Shore...complete with parlor piano harmonies. It gives a kind of Currier and Ives (no pun intended) effect.