We cover the waterfront 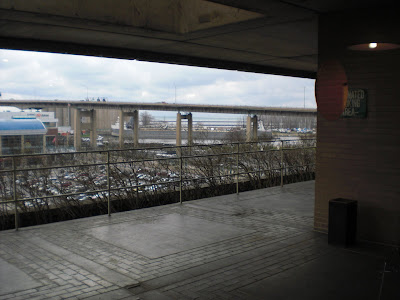 Thanks so much, Mike and Jenn, for your sweet comments yesterday! It was so nice for me to have people with whom to share that odd little adventure. And your thoughts were so kind and I have found myself smiling over this whole thing. I have been listening to Leonard Pennario playing those waltzes on my new hi-fi and thinking about that.

I wish I could top yesterday's story today but I can not!

Still, there was this picture I took in the office cafeteria. Did anyone else check out that gigantic freighter in the Buffalo harbor? Has anyone else been seeing big ships like that? It seems we are seeing a few more than we used to.

Click on the picture so it will be bigger and you can see the ship. In front of the grain elevators is where you see the left-hand end of the freighter. Doesn't the Skyway look beautiful?

From now on when I see something important I am going to have my camera ready.

This is my second digital camera. Howard gave me a digital camera for my birthday but I lost it in California the week Pennario died. I think what happened was, I was having lunch with Leonard's brother and a few other people the day after Leonard died. We were trying to eat anyway. We were all in this kind of daze. My cell phone rang and it was the Los Angeles Times wanting to talk about Pennario so I went outside to talk to them and I sat on the grass, like a hippie. And I think that is when I lost my camera. I think it fell out of my purse.

For some reason it really bothered me, losing that camera. It was a present, that's what bugged me. And then I had to go buy a new one and now, I cannot look at that camera without thinking of how I lost the first one and had to buy a new one. And it's stupid. Looking back on that week, I have to tell myself, what was losing a camera, in the grand pantheon of things? I mean, next to losing Pennario? But maybe that went into it too. The camera was the icing on the cake, you know?

I was always losing things in California. I lost a very expensive pair of glasses, too. With the pink frames I love. I lost them I am pretty sure at the pool at my apartment complex. No one ever turned them in. People in California are thieves. They are not like people in Buffalo.

Here is the pool where I am pretty sure I lost my glasses. It is not as big as it looks in the picture but it was a nice pool anyway. 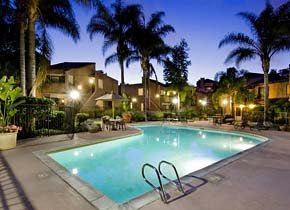 Funny, to think that's where I was a year ago! Swimming in that pool, soaking in that hot tub.

Now I am back, looking at the Buffalo harbor.