The Museum of Menstruation, and other matters 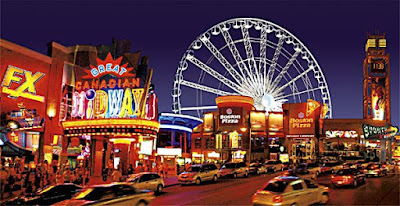 The Leonard Pennario biography blog made the big time yesterday, featured on Access Niagara. Brittle Canadians read of my experiences traveling to Niagara Falls, Ont., to meet with Pennario's decorator. They posted a few of my comments. And there was much kvetching.

Catch the controversy here. One thing I like, for once no one attacked me personally. They were just defending Niagara Falls, Ont. They love Clifton Hill! Isn't that interesting? I put that picture of Clifton Hill up above just so we can all chew on that.

Ever wonder what used to be where Clifton Hill is now? I went looking around and came up with this picture from 1937: 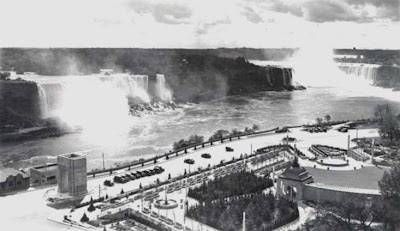 Kind of pretty, isn't it? When I was little some of that was left. One thing I remember is Oakes Gardens. You entered it through a beautiful gate and I thought it was the most magical place in the world. There is a bit of Oakes Gardens left, squeezed in next to the Hard Rock Cafe. But when you walk through it you hear this rock and hip-hop pounding at you.

Speaking of what used to be where, Howard and I have been researching our former neighbors on the Delaware Avenue block off Niagara Square where sits Big Blue. Across the street from us used to live Dr. Ray Pierce. He is described in Father Dunn's great gossipy book "Delaware Avenue Mansions and Families" as "a famous charlatan."

But when I compare his offerings with what I see at modern-day health food stores it just looks as if Dr. Pierce was an herbalist. I'm just saying. The stuff he sold is like what I see in drugstores now. Though I cannot say I have seen anything with as witty a name as "Dr. Pierce's Pleasant Pellets."

Dr. Pierce besides living across Delaware Avenue from Big Blue had the famous Dr. Pierce's Invalid Hotel where D'Youville College is now. Leonard Pennario used to practice at D'Youville College when he was in town. Note to out-of-towners: D'Youville is a Catholic college specializing in nursing. My Uncle Bob was a professor of philosophy there. Now it is co-ed but in Pennario's time it was all girls. No wonder it was popular with itinerant Catholic concert pianists.

Back to Dr. Pierce. He also had an elephantine place on Main Street called Dr. Pierce's Invalid Hotel and Surgical Institute. Wow, I do not like the sound of that "surgical institute." Ow, ow. Ow! Here is a picture of it: 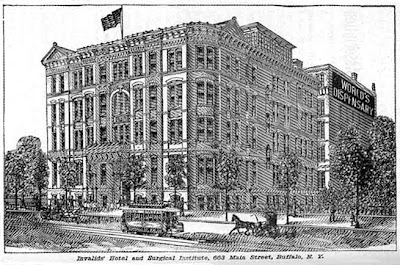 This picture comes to us -- I am not kidding -- courtesy of the Museum of Menstruation. Who ever knew there was such a thing? Maybe it is on Clifton Hill. Oh, wait. On second investigation, the museum appears to exist only online. You can access it here. It is a kind of scrambled Web site but the bright side is, it appears to be obsessed with Dr. Pierce, the way I am obsessed with Leonard Pennario. Worth a look, I say.

Howard found a leaflet called "Pierce's Memorandum and Account Book." Every page has a different month and a different heading. The booklet is for the year 1907-1908.

January says: "WHAT IS DOTTED DOWN HERE WILL BE USEFUL IN AFTER YEARS."

For May: "HOW OFTEN WOULD I BE MISTAKEN WERE IT NOT FOR MEMORANDA IN THIS BOOK."

June: "THIS BOOK WILL SAVE THE LABOR OF LOOKING UP DATES."

September: "ALL CONTRACTS MADE BY ME ARE REFERRED TO IN THIS BOOK."

The booklet is full of testimonials from patients who attest they have been cured by Dr. Pierce's quacky remedies. This was is typical:

"Was a Nervous Wreck."
Fully Restored by Dr. Pierce's Medicines.

Weak and Run Down.
Female Weakness.

Hmmm, sounds like me in Pilates class yesterday! What a weakling I was! The teacher, Jim, had to walk over to my mat and poke at me to make sure I was still alive. 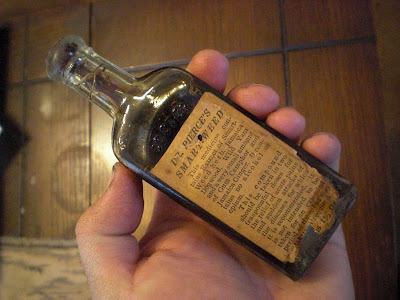 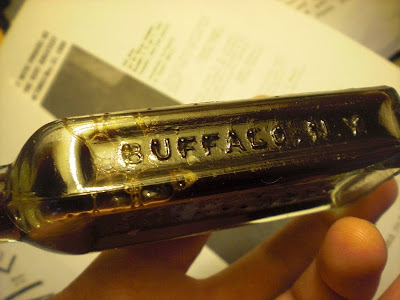 Howard found an unopened bottle of Dr. Pierce's Smart-Weed (a brand name I love) and surely the Pleasant Pellets will be next. They exist out there somewhere. We will find them.
Next time I have to go to Niagara Falls, Ont., I will make sure to take a few along.
Posted by Mary Kunz Goldman on November 15, 2008

Just to keep things straight, the 2 pictures of Niagara Falls that you have posted are not of the same area at all. The first is obviously a view up the Hill and the second is Oakes Garden which is located at the very bottom of Clifton Hill and which, BTW, has not changed in size or design since it was built 70 years ago.