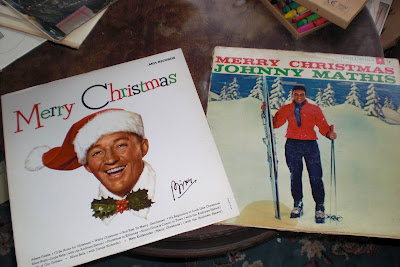 This being the first Sunday of Advent I came home from church and decided I would inventory my Christmas record collection. It is very exciting for me, because I never know at any point in time exactly what I have.

You would not believe the treasures I found! First there were the two classics pictured above.

Then there are these two: 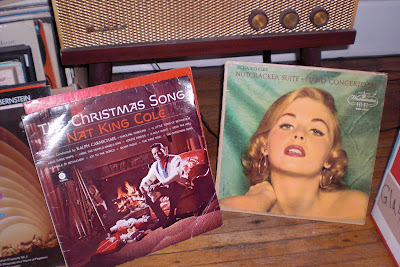 The record on the right is of Tchaikovsky's "Nutcracker" Suite. I don't know how that woman's face ended up on the cover but you have to love it.

I don't want to make everyone all jealous, but how about these two? 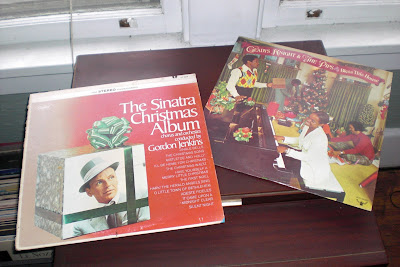 Click on the picture to get the great details of the Gladys Knight album cover. Observe the hi-fi, visible beneath the records.

Here is the record that had been lying on the hi-fi to begin with so I thought I would take a picture of it. 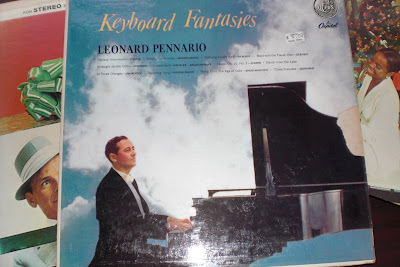 It is always restorative to look at Leonard Pennario album covers so here is another one. This is the picture I always used to joke was his bimbo picture. Every great artist has one, where he is posed and airbrushed until he looks completely vacuous. 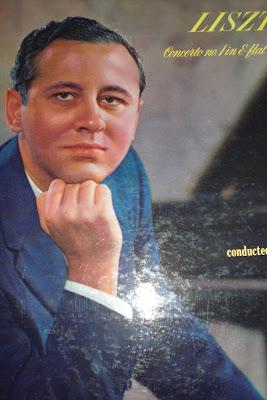 Ha, ha! Not a thought in his head! I miss laughing with Leonard over stuff like that.

Here, next to "Rhapsody Under the Stars" (one of the records I scored with the hi-fi) is another Christmas classic. Click on it and you will see why it is so great -- it came from the A&P! 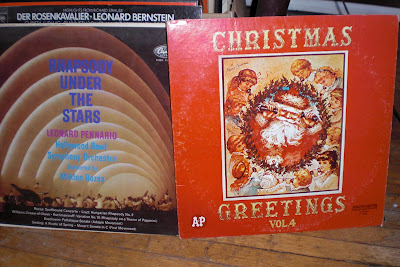 This is a record we had when we were kids, but I found another copy for my very own. 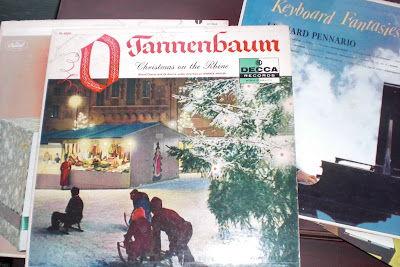 There is a hilarious story attached to this record. All the girls in our family were sent to, ahem, the Buffalo Academy of the Sacred Heart (BASH) and once my sister Margie brought in this record for Christmas Mass. She was supposed to play "Silent Night" at Communion time but she put the needle on the wrong track and instead of "Silent Night" the big group of 400 girls was treated to this booming track titled "The Bells of Germany," or something like that. BA-GONG, BA-GONG, GONG, GONG, GONG..." At top volume! Margie was laughing so hard she could not take the needle off the record so it just went on and on. Ha, ha! That is a story that is always told in our family at Christmas time. It is probably also still told in the halls of Sacred Heart.

I hope this exposition helps everyone out there in Blog-O-Land see your Christmas record collections through new eyes!

And if yours can't compare with mine -- well, whose can? -- pssst! I hear there's a sale at Amvets today.
Posted by Mary Kunz Goldman on November 30, 2008

Email ThisBlogThis!Share to TwitterShare to FacebookShare to Pinterest
Labels: Vinyl

Yeah, but I bet you don't have the lp of the Bielefelder Kinderchor under the direction of Friederich Oberschelp (not Oberschuft) singing German carols, or, for that matter the old E. Power Biggs Christmas album recorded at the Stadtpfarrkirche of Eisenstadt, Austria, where the arrangements are by Dan Pinkham and the organ is one that Haydn played. I do!

Hows that for run-on sentencing?

OMG... this is like the nightmare of the thrift shop record collector.... Johnny Mathis, Andy Williams, Disco Duck, tons of Christmas records and religious music.... I collect Hawaiian records so I won't make fun of that... they are usually great because no one listened to them and they are in perfect condition. Aloooooooha!!! Suck 'em up! But thrift shops, Good Will, Salvation Army.... they just don't know when to throw certain records away... so that you can actually move the records in the boxes. People donate them because they DON'T WANT THEM... and they aren't selling so THROW THEM AWAY!!! Except for the Hawaiian records. LOL

Personally, it just isn't Christmas without the Squirrel Nut Zippers doing "Santa Claus is Smoking Reefer," but we may have different sensibilities on this subject.

That cracked me up! I had totally forgotten about playing the BELLS at BASH during the German Club mass! Oh, how funny that you remembered that!