An evening on LaSalle Avenue 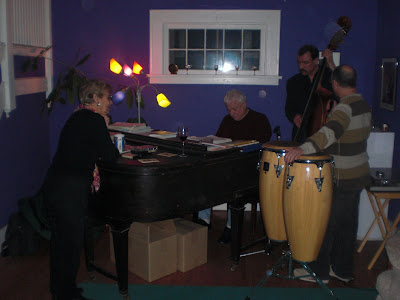 Ach du lieber! I am becoming a night person! All this virtuous getting up at 6 a.m., and then lastnight, there I am, out until I do not want to say what hour.

I went over to my friend Gary's house, was what I did, so we and a group of relatives and musicians could recover from Thanksgiving and, more importantly, share our leftovers. Well, I brought something new. I baked two loaves of bread. I ate some of that bread with Gary's superb turkey soup and I played with Gary's cousin's schnauzer puppy, Mr. Lucas. Here is something funny. Gary's friend Lou, who was also there, has a schnauzer named Uncle Lou. Mr. Lucas and Uncle Lou. What are the odds?

While I was thinking about that, I fell asleep.

Honest, I wrapped myself in an afghan and conked out. Howard was at the piano playing with Kevin, the bassist from Babik. And I was enjoying it but what with all the excitement of the last few days, I had just had it. I will tell you how pathetic I was. Gary's mother was laughing at me lying there. And Gary's mother is 89! I know, because it was her birthday. We had a cake from Tops.

That is Gary's mother in the picture up above, leaning on the piano, wearing earrings.

When we left, sometime around 2 a.m., she was feeling sorry for me. She was standing there awake as anything with a glass of wine and she said, "I've always been a night person. And I need only four hours' sleep. I've always been this way."

Leonard Pennario would never have named me his authorized biographer had he known I was the type of gal who fell asleep at parties.

Well, let's not worry about that. Let's look at pictures of Gary's house. His house is beautiful. Last year it was The Buffalo News' Home of the Month. It was like Seinfeld or something: A bunch of us went over the night before to help him clean up and rearrange furniture and fuss over the place because the next day the photographers were coming to photograph his house for Home of the Month. They even put Gary's picture on the front page. Later that week he told me he understood how celebrities felt. "I can't walk out the door without being recognized," he complained.

Here is Gary (right) with lounge sensation Guy Boleri (at the piano). 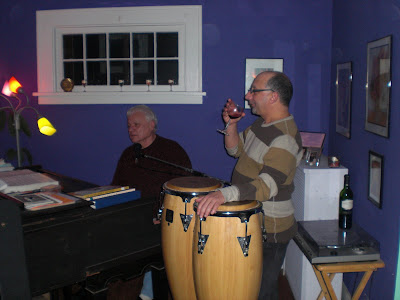