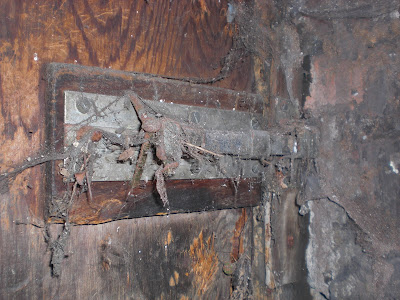 Midnight on Halloween we shall pry open this mysterious
door at Big Blue and discover its horrible contents.
Click image for full sized yuck.
That was a historic debate lastnight between Sarah Palin and Joe Biden. It was historic in that I stayed awake. I accomplished this through not sitting up in bed, not lying down. Eventually I lay down and then I promptly fell asleep. Howard just said, "You slept through the whole thing." But I didn't! I heard about half of it.

I am not saying the debate was boring. The trouble was, a few hours before I had dinner over at my friend Gary's house with lounge sensation Guy Boleri. Guy was drinking White Zin. That is what lounge sensations drink. But Gary and I sampled our homemade Barbera from '06 which was a very good year. Too good a year, so let's just say that by the time the debate rolled around, I was sleepy. Plus, as usual, I was up before dawn, working on this chapter about Leonard Pennario's three years in the Air Force. I have been having the best time with this chapter. I love how Pennario goes through life.

Bottom line: I cannot be awake for both Leonard Pennario and Sarah Palin. My day is not big enough for both of them.

But here's what bugs me this morning. You do not have to hear the debate to know exactly what the media will be saying about it.

These pollsters have lost all credibility with me. They simply lie. Well, enough about politics. This October I am telling a spooky story every day and now it is time for today's.

This concerns the bat at Big Blue.

Howard was at Big Blue one night when a bat flew into the Blue Room. It did orbits all around the room, whipping right past Howard's nose. Then it flew to the center of the room and just hung there, upside down, looking at him.

Howard does a great imitation of the bat's face, of its beady little eyes. Big Blue is home to a number of bats, we believe. But that is the only one that decided to be sociable. To be honest, I do not get the idea that Howard minded that much. It is refreshing to know that in the middle of downtown, practically right across from Buffalo City Hall, is a place where bats live.

Once when Howard was in the cellar a cat came out of nowhere. That is another spooky story. You get two today, for the price of one! That was right as soon as he bought the place and there was no electricity turned on yet. "And it was in the deepest bowels," he says.

The cellar of Big Blue is a very spooky place with walls made out of stone, untouched since the days of the Civil War, and a very weird crawl space, about three feet tall and full of coal ash. We bet there are bodies in there. It is just a feeling we have.

Tomorrow I will tell a creepy story that happened further down Delaware Avenue -- near Delaware and Utica, on the site of the Jetsons building. Where Ruth Killeen has her penthouse.

That is the story of the haunted elevator shaft. It is true and it is worth waiting for.