Today it is back to Pilates class with my fat self. That pasta dish yesterday was my undoing. I could not stop eating it! It's funny, other people seem to wrestle with the dessert dilemma. I do not have much of a sweet tooth -- though I can see how that's a problem with people when I go to California and Leonard Pennario starts stuffing me with ice cream. Normally my weakness is -- well, food, in general. Everything.

Even vegetables. It gets to the point that in the summer I tell myself Mary, you can't eat the entire farmers' market.

About that blueberry pie yesterday. I have a confession to make. It was supposed to go to the party with me. Instead it wound up staying home. Howard wouldn't let me bring it. It came out of the oven looking too good so we decided we didn't want to share it. How piggy is that? Luckily at the last minute I remembered that the gal giving the party was going to have a lemon tart. And she did. And it was magnificent. So, good thing the pie stayed home with us. 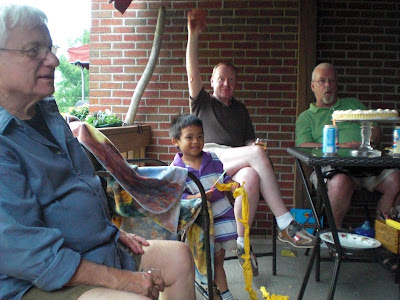 Among the guests, all clueless to the very existance of the MKG blueberry pie that they were being denied, was this father and son reality tv show celebrity team. Pictured at left is lounge sensation Guy Boleri. Our friend Rob is on the right. 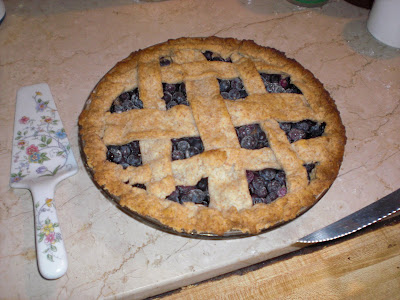 But one more reason I am going back to gym class.

I have heard it said that we eat more in the winter than in the summer. But I think I take in more calories in the summer. There are those two-for-one specials at Sunset Bay. And fries on the patio at Papa Jake's. And the Czech beer at the Three Deuces. Remember, I said I was at the Three Deuces -- that is 222 Gibson, across from the Broadway Market -- on Friday when I heard about Tim Russert dying. The owner of the Three Deuces is Czech and he has this wonderful beer from Prague he will sell you if you know enough to ask for it, which we do.

That is summer -- being perched on a barstool in dark, cool 222, listening to the fan oscillate, half watching a Burt Reynolds movie on the overhead TV, sharing news and gossip with fellow beer drinkers and talking with the bar owner about how awful the Communists were and what a relief it is that they are out of the Czech Republic. I share my fellow blogger Chris Byrd's concern for the Broadway/Fillmore district. And if one way to support that classic neighborhood is to quaff Czech beer at the Three Deuces, well, it is a tough job but someone has to do it.

Just thinking about that brightens a Monday morning.
Posted by Mary Kunz Goldman on June 16, 2008