Goodbye to a great man 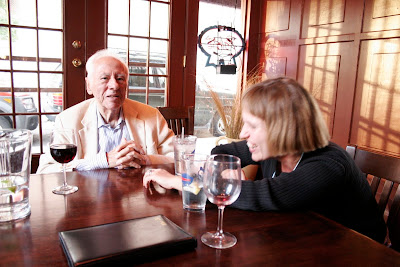 Leonard Pennario and MKG at Buffalo's Pearl Street Century Grill. Photo by Howard
I have to write something difficult and sad today. I do not know how to put this because I always spend my blog joking around. But I knew the day would come when I would have to write this, and today, it turns out, is that day.

We lost Leonard Pennario lastnight. He died at midnight, as I understand it.

I didn't feel free to say this earlier, but the reason I flew out here yesterday on the spur of the moment was that I had spoken with Leonard on the phone and got the idea that he was going fast. I wanted to see him one more time before he died. When I got to his bedside (after that long and awful fight with horrible Hertz rental car) he was on oxygen and mostly unconscious, but I got the idea he knew I was there. So I stayed there. When I left lastnight I leaned down and kissed him and cuddled him. The beautiful old man. I am going to miss him so much.

I will always remember meeting him in Buffalo last fall, how courtly he was, how romantic -- this man who had made his debut with the New York Philharmonic at 19, who shared the stage at Carnegie Hall with Jascha Heifetz and Gregor Piatigorsky. Spending last winter with him in California was like stepping into a movie. I thought that many times, while I was there with him. They do not make pianists any more like Leonard Pennario. There will never be another one.

I am comforted in that I was able to read him so much of my book over the past few months, and that he said he loved what I was writing. Everyone who read what I wrote about that on the blog was so supportive, too, and I am so grateful.

Wow. This must be difficult on you, as your admiration for the man is obvious from your series of blog entries. My condolences.

I am so very sorry for your loss...

And very glad you were able to be there with him.

God bless you and Leonard. He was lucky to have someone as special as you to help him through (and help him to greatly enjoy!and savor!)the last year of his life.

Thanks to you, it was probably his best year. He was able to reflect on all of the best years of his life and tell his stories. And not just tell them; he knew that you would be a careful and faithful guardian and teller of his stories. You made every moment in the last year special for him; I know that you did. Would that we would all have that kind of special attention ever, especially in our very last year!

All of that being said, you have still lost a best friend and we all grieve with you and for your loss.

Hi Mary, I was thinking I need to write to you! Marta said she thought that she just heard on the radio that Leonard had passed away, so I googled him and located your blog. So sorry to hear the news - look forward to your book! This has been such an eventful year for you, and you must feel a tremendous loss. Love from us both, Stephen

My deepest condolences to both you and his family.

I am so sorry.

Keep up on the work you have to do, certainly, but also give yourself time to grieve.

My thoughts are with you.

I am very happy that Mr. Pennario became such a large part of our lives.

I first met Leonard Pennario last November when he came to Buffalo to accept his induction into the Buffalo Music Hall Of Fame. Later that weekend, over our lunch at the Century Grill, The Wife accepted Mr. Pennario’s request to write his authorized biography.

Leonard Pennario was an extraordinary man and he will continue to inspire me every day of my life.

I learned alot about him through reading your blog and it was quite apparent that you had become good friends..My condolences to both you & Howard for the loss of your friend and to his family also.
Michele Johnson

My condolences to you on the loss of Mr. Pennario. Thank you for letting us know about yet another
"made in Buffalo" treasure.
There is a very nice story in today's New York Times as well. We all look forward to reading the book and learning more about this wonderful man.

Sorry for your loss.

Mary, I am so sorry.

I am sure that Leonard died a happy man knowing that his life will be remembered forever through your caring eyes.